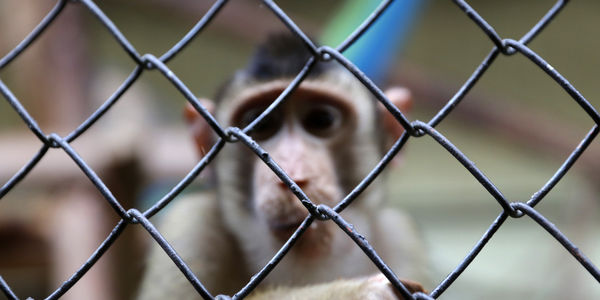 A CAARE investigation has revealed that John Hopkins University has been keeping monkeys cruelly confined in a laboratory to study the problem of human gambling.  We have learned that at least two monkeys, Aragorn and Isildur, have been used in invasive brain experiments, including extreme confinement.

In Aragorn's case, he's been subjected to these experiments for nearly a decade. Please help us end these terrible experiments and get the monkeys released to a sanctuary.

These hideous experiments consist of teaching the monkeys how to "gamble" by prolonged fluid deprivation and rewarding them with miniscule amounts of water – droplets so small they are measured in thousandths of an ounce – when interacting with computer simulations.

Once they are trained, a hexagonal contraption is surgically implanted into their brains to allow for the insertion of multiple electrodes to record neuronal activity.

Throughout the experiments Aragorn and Isildur are shackled in full body restraints including a head locking device, while being held inside a noise-isolated chamber and wearing an eye-tracking device.

In one study alone, Aragorn and Isildur were subjected to this torture for a total of 1,399 trials.

Gambling – like substance abuse – is an addiction unique to humans and it is completely useless to study it in monkeys.

Outrageously, over $5 million federal dollars have already been spent on this madness, while there are far more effective and human-based methods for studying gambling addiction.

I was sickened to learn that researchers at Johns Hopkins University are subjecting monkeys to torturous "gambling" experiments involving prolonged fluid deprivation and full body restraint for hours.

Two monkeys – whom the lab has named Aragorn and Isildur – have been undergoing these horrible experiments for years. It is time to end these experiments and release the suffering monkeys to a sanctuary to live out their lives in peace. In Aragorn's case, he has been subjected to this shocking abuse for at least 10 years.

The experiments are based on the absurd premise that we can use monkeys to investigate whether a region of the monkey's brain can help scientists learn about human addiction to gambling.

In these totally unnatural experiments, Aragorn and Isildur are made to participate in "gambling" trials on a computer screen while completely restrained in "primate chairs" with electrodes implanted permanently in their brains. They are forced to submit by being ruthlessly deprived of water. For compliance they are rewarded by tiny sips of water measured in thousandths of an ounce.

Safe and noninvasive research using MRI and EEG are available to study the activities of the brain in human volunteers. Neuroscientists can directly study blood flow and electrical activity in the brain as willing participants carry out tasks with computers or simulated casino games, including people with actual gambling disorders.

The National Institutes of Health has spent over $5 million dollars to fund these torturous experiments on monkeys like Aragorn and Isildur.  It is time for this cruelty and waste to stop.

I respectfully request that NIH and Johns Hopkins University end these terrible experiments and immediately release Aragorn and Isildur to a sanctuary.