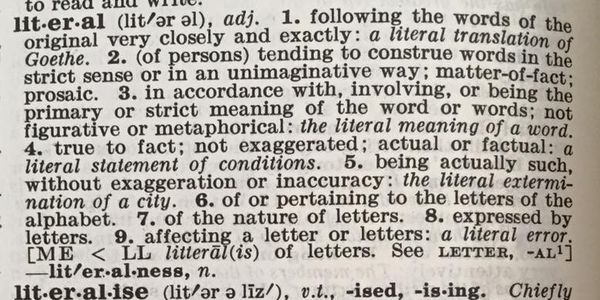 Restore "literally" to a word that makes sense

This petition respectfully requests that the Oxford English Dictionary, Merriam-Webster Dictionary, and Cambridge Dictionary reverse their decisions to include the figurative use of words or phrases in its definition of “literally.”

1. In a literal manner or sense: exactly; ‘the driver took it literally when asked to go straight across the traffic circle’; ‘tiramisu,’ literally translated “pick me up.”
1.1 Informal: Used for emphasis or to express strong feelings while not being literally true: ‘I have received literally thousands of letters.’

Regarding definition 1.1: What if a person has—literally—received thousands of letters? Short of forcing someone to look at the massive collection of letters, how does one communicate the reality of the numbers without the once-trusted “literally”?

Merriam-Webster definition of “literally”:
1 : in a literal sense or manner : actually
2: in effect : virtually

Problems arise, here, with both definitions. Regarding definition 1: Now that “figuratively” and “literally” mean the same thing, if someone warns a friend, “That man is literally insane,” how is the friend to know the man is, in fact, literally insane—and probably dangerous?

And how should one explain the plot of the Rutger Hauer movie Deadlock, a movie in which prisoners wear electronic necklaces that activate when a prisoner tries to escape, making the prisoners’ heads explode—literally? Or a critical scene in Superman, in which Superman literally spins the world around to alter events?

The few closely related synonyms for “literally”—really, actually, truly—have already lost their meaning as a consequence of over- or misuse and lack the (once upon a time) effect of “literally,” the single remaining word we had at our disposal that communicated, “This is factually and/or objectively true with no exaggeration nor estimation.”

Without “literally,” what do we have?

I was wiping crumbs and some foreign white substance from a table at Panera Bread recently when a manager wandered over. “Was that table dirty?” she said, very concerned. “Oh, it’s no problem,” I said. It really wasn’t. I’d arrived immediately after the previous customer had left, allowing no time for cleanup. I said to the manager, “The person before me just left.” She said, “Someone really should have cleaned that…” and looked around for whoever handled the section. “No, no,” I said. “They literally just left before I sat down.”

And then I realized: my use of “literally” to make clear the true shortness of time between the previous customer’s mess-making and my cleanup was a waste of breath for a dead word. “Literally,” which simultaneously meant one thing and the opposite of that thing, canceled itself out; it literally had no value.

The decision to include figurative use in the definition of “literally” as a reaction to overuse of the misuse has led to this: One must now say, “I mean literally-literally, not figuratively-literally.” Is this in the best interest of language clarity? Does it truly improve the English lexicon?

It can (and should) be argued that language is ever-evolving, decided by its users. But there has been no sanctioning of the word “basghetti” for “spaghetti,” a common mispronunciation as old as the word “spaghetti.” An official list of idioms does not include “nip it in the butt” to accommodate those who have said it for years in place of “nip it in the bud,” and “borrowed” has not come to mean “loaned” in spite of rampant use of the phrase, “I borrowed him ten dollars.”

That words or phrases are used incorrectly shouldn’t be adequate cause to alter their official meanings or spellings unless the revision improves clarity or efficiency of language. The inclusion of hyperbolic or figurative intent to the definition of “literally” does neither of these things.

We ask that you please restore “literally” to its original meaning, perhaps the strongest argument for which is that even the Oxford English Dictionary can’t sufficiently explain the figurative element of “literally” without using “literally” in the definition, creating a fallacy of definition.
OED:
Informal: Used for emphasis or to express strong feelings while not being literally true: ‘I have received literally thousands of letters.’

Care2
Restore "literally" to a word that makes sense
SHARETWEET