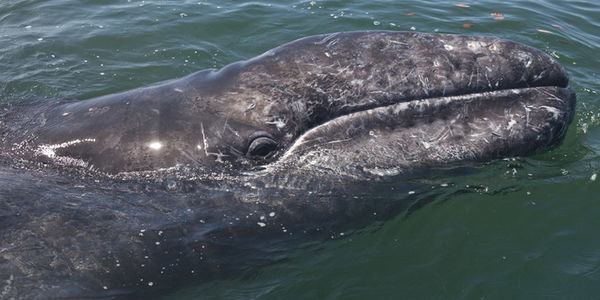 In just eight short days in early April, four gray whales washed up dead in the San Francisco Bay Area. This isn't normal. In fact, it's such a catastrophically big deal that the federal government's National Oceanic and Atmospheric Administration (NOAA) is classifying this period of die-offs as an "unusual mortality event."

These whales aren't technically listed as endangered yet, but their communities are dramatically dwindling. A full 25% of gray whales have died off in just the past five years, from 2016 to 2021. And there are three main factors driving these animals' deaths: entanglement in fishing gear and other floating debris, violent impacts by ships, and climate change, which is causing starvation and malnutrition.

In order to save these whales, the U.S. government has to get serious about curbing climate change and ocean pollution. Sign the petition!

In the spring, whales swim north near Alaska to feast on some of their favorite foods — but due to climate change, these nutritious feeding grounds are increasingly turning up barren. That means the whales swim all the way from central California toward the Arctic, only to find a proverbial feasting table without a meal in sight. Hungry, tired, and underfed, the whales have to find some other way to sustain themselves for months until their next big migration. Unless they can't find some other way... and instead, wash up on the shore starved and dead.

Two years ago, back in 2019, scientists discovered a similar disturbing trend in gray whale die-offs. In just seven days, three of these animals turned up dead, with these deaths linked to malnutrition from climate change, too.

This will keep happening if we don't take action soon. Do we want to see a future world in which whales are simply a mythical creature of the past? In which these intelligent, social beings no longer exist — wrecked by climate change, bulldozing ships, and ocean debris?

Tell Congress to take this unusual die-off seriously. Lawmakers must pass legislation to fight climate change and reduce ocean pollution from fishing, plastics, and other debris!
Sign Petition
SHAREShare With FriendsTWEETEMAILEMBED
Sign Petition
See more petitions:
You have JavaScript disabled. Without it, our site might not function properly.