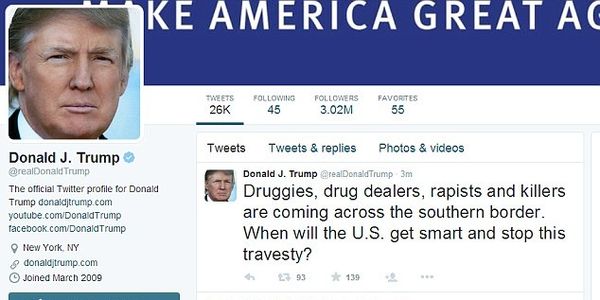 Update 10/02/2019: Sen. Kamala Harris sent a formal letter to Twitter CEO Jack Dorsey asking the company to suspend President Donald Trump's account. "I believe the President's recent tweets rise to the level that Twitter should consider suspending his account," Harris wrote. "When this kind of abuse is being spewed from the most powerful office in the United States, the stakes are too high to do nothing." Read more here: https://www.mediaite.com/trump/kamala-harris-sends-letter-to-jack-dorsey-urging-twitter-to-suspend-trumps-account/?

Update 9/30/2019: "Trump's recent tweet quoting a longtime evangelical pastor who warned of a 'Civil War' if Democrats seriously pursue removing him from office could actually be grounds for impeachment, one Harvard Law professor said." At the very least, it's definitely grounds for Twitter to suspend to his account, based on their policy against hateful conduct. Please sign and share if you agree. https://www.newsweek.com/trump-civil-war-tweet-grounds-impeachment-1462044?fbclid=IwAR0ah5gSBBatMPxf8scN8OrsU2DYO29aW11Uay3UaHDqVQhEESlNm9gAG4s

Update 9/13/2019: Trump is escalating racial hatred on Twitter. Let them know. Express your concern with Trump's recent tweets telling four duly-elected members of Congress to "go back" where they came from. "Vigorous debate and disagreement over policies and positions are essential elements of this or any democracy. We treasure our freedom to be outspoken and forceful advocates or opponents on any issue. While singling out and personally denigrating individuals is never appropriate, it is even more inappropriate when the language used can stoke racial and ethnic division." --Emily Gabel-Luddy, Mayor, city of Burbank

Update 7/23/2018: Late last night, President Trump threatened Iran in an all-caps tweet, saying there would be catastrophic consequences for any threats to the U.S. This isn't the first time Trump has provoked foreign leaders or instigated war on Twitter. It's time for Twitter to suspend Trump's account now.

Last week, instead of focusing on keeping the economy running and Americans safe our president decided to take aim at America's fourth estate - the media. In a borage of posts first aimed at two news hosts he tweeted:

"I heard poorly rated @Morning_Joe speaks badly of me (don't watch anymore). Then how come low I.Q. Crazy Mika, along with Psycho Joe, came to Mar-a-Lago 3 nights in a row around New Year's Eve, and insisted on joining me. She was bleeding badly from a face-lift. I said no!"

Later he took it to a whole new disgusting level by tweeting a video of himself as a WWF wrestler body slamming and then punching a man whose head had been replaced by the CNN logo. The message was clear. If he could, President Trump would kick CNN's behind. Not only are these tweets shameful, but they are dangerous. President Trump is encouraging violence against one of the most important institutions in our society, ones that help protect us from tyranny and that shine lights on the lies the powerful tell to suite their own agenda.

It is no wonder then, why he wants to shut the media up, but using his Twitter account and his millions of followers to do it is a step too far. According to Twitter's rules Twitter may suspend an account for a number of reasons, including if the user participates "in the targeted abuse or harassment of others."

What Trump has been doing over the last week is definitely targeted and can be considered nothing less than harassment yet, Twitter refuses to suspend his account.

Twitter should stand up to America's biggest bully and give Trump a well deserved time out. The world needs a break from his nonsense and he needs to think about what he's done.

Donald Trump has crossed a line by attacking people based on their race, religion, gender and more. Twitter's Rules state, "Any accounts ... engaging in the activities specified below may be temporarily locked and/or subject to permanent suspension" The defined activities include:

Hateful conduct: You may not promote violence against or directly attack or threaten other people on the basis of race, ethnicity, national origin, sexual orientation, gender, gender identity, religious affiliation, age, disability, or disease."

Examples of Trump's hateful conduct on Twitter include these tweets:

"Jeb Bush likes illegals because of his wife."  (Bush's wife Columbia is Mexican-American.)

"Sadly, because president Obama has done such a poor job as president, you won't see another black president for generations."

"Be careful Bernie, or my supporters will go to yours!" (Referring to Sander's rallies.)

"The U.S. cannot allow EBOLA infected people back. People that go to far away places to help out are great-but must suffer the consequences!"

By locking or suspending Donald Trump's account, Twitter can send a powerful message that hate is not accepted or condoned on their platform.

This is not a free speech issue. Trump can spew all the vitriol he wants at his rallies and any other public place. However, Twitter, as a third-party, has every right to define what type of content is allowed on their platform.

We call on Twitter to investigate @realDonaldTrump and temporarily suspend his account until, to use Trump's own words, they can "figure out what is going on".