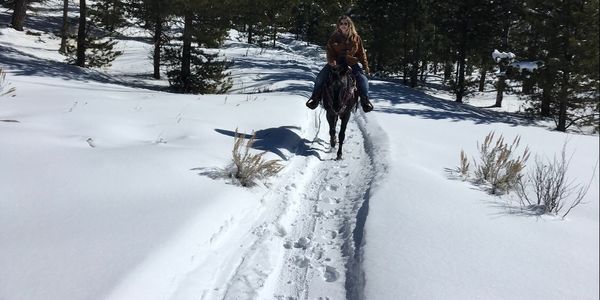 Thompson Park, located just outside of Butte, Montana, is managed by the Butte Ranger District of the Forest Service and Butte Silverbow County for Public Recreational Opportunities. The trails are designated for open access to members of the community for foot, bicycle and horseback use yearlong.

The Butte Ranger District is proposing to close the trails to horses from December-March so that the Highland Cycling Club can groom trails with snowmobiles for fat tire bicycling. Several members of the community, myself included, enjoy riding their horses on these trails all year long, particularly during the months of December-March, as this is where the snow is not too deep. We would also like the same opportunity to groom trails with snowmobiles for horseback riders. There are 25+ miles of trails, yet the Butte Ranger District has not approved the designation of lower trails in Thompson Park for equestrian use during winter.

It was also suggested in March 2019, my group ride in Pipestone or the Blacktail Canyon Trail. When my group followed this advice, we dealt with dirtbike and atv riders nearly colliding with our horses, in addition to people shooting various calibers of guns, which also spooked the horses. We tried to haul horses to other trailheads, but we found it difficult due to slick-icy roads and unplowed areas that do not accommodate parking for trucks-trailer. Overall, we found it not only difficult to ride in higher elevations due to the amount of snow fall, but quite dangerous as well.

Allowing special interest groups to have special policies of who can and who cannot access trails will be not only dangerous, but also detrimental to the equestrians that enjoy the area. This is especially troublesome for our group (The Trail Riding Buddies of Butte), when it's the only place we have to ride in winter/early spring, as hauling horses and riding on icy roads while horses slip and fall is not only dangerous, but we also have to deal with traffic and other motorized users.

We, the undersigned want to tell Butte District Rangers to propose fair and equal access use for all!