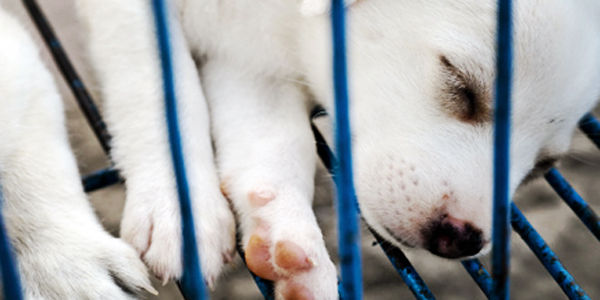 Animal advocates are supporting legislation that would ban the retail sale of dogs and cats who don't come from an animal control facility, shelter or rescue and are asking stores to adopt a humane business model by partnering with these types of organizations, instead of sourcing animals from mills.

According to the CT Alliance for Humane Pet Shops, of the 16 pet stores that sell dogs in the state, 13 of them are undoubtedly getting dogs from puppy mills. The rest are obtaining dogs from in-state breeders, but that still doesn't mean they came from someplace better – no reputable breeder would give dogs to a pet store.

A bipartisan task force is currently looking into the origins of dogs who come into the state to be sold at pet stores and will make recommendations for the next legislative session.

Please sign the petition urging Connecticut's lawmakers to take a stand for companion animals by supporting humane legislation that will help end support for the mass production of dogs and cats.

As a dog lover and animal advocate I was thrilled to hear that Connecticut is considering taking serious steps to stop perpetuating puppy mills by ensuring that dogs sold in pet stores come from animal control facilities, shelters or rescues.

Pet stores often falsely assure customers that their dogs have been sourced from breeders that are licensed by the U.S. Department of Agriculture, but when it comes to inspections, Animal and Plant Health Inspection Service’s Animal Care unit, which is responsible for enforcing the Animal Welfare Act, has been woefully ineffective in terms of dealing with problem breeders and repeat offenders.

Dogs are often kept in filthy conditions without even basic care, while mothers are forced to churn out litter after litter of puppies until their bodies are spent. Meanwhile, consumers continue to take home sick dogs from pet stores and are left with either thousands in veterinary bills or a dead pet, while thousands of other adoptable animals continue to be needlessly euthanized.

The majority of pet stores in Connecticut that sell dogs are unquestionably supporting puppy mills and this cycle of cruelty.

Both small and large stores across the U.S. have adopted the type of humane business model that is being supported by animal advocates here and have proven that it can be successful, while the other pet stores in the state have proven they can operate without peddling puppies to the public. There's no reason for the remaining few who sell dogs to continue supporting large-scale breeders with poor track records when it comes to animal welfare.

I sincerely hope you will take a stand on behalf of companion animals and support legislation that will help protect dogs, cats and consumers by banning the retail sale of animals from mills.