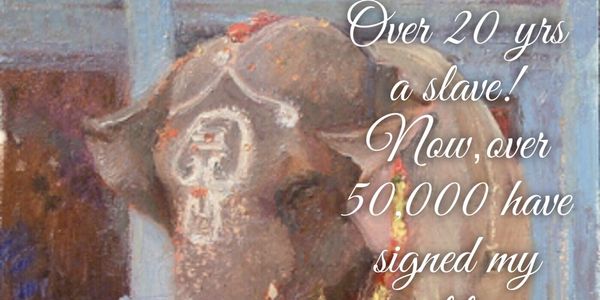 We respectfully request the release of LAKSHMI the Temple Elephant to a Sanctuary where she can live out the rest of her life with freedom and comfort.

Lakshmi has stood stoically for over twenty years outside the SRI MANUKULA VINAYAGAR TEMPLE, Pondicherry, India.

She arrived in Pondicherry in 1997; she was then just 6 years old – only a baby. (An elephant's life can reach 80 years, even 120 in exceptional cases.) Born in Assam, it is in Kerala that she was found and selected.

Every day, Lakshmi is woken at her owner's home at 4:00 am. Her Mahout (caretaker) brushes her and bathes her in a tank with contaminated, stagnant water. Then she's given just a scoop of leftover rice. She's then led to the temple in shackles—her only exercise. She performs her rituals at 7:30 am, then again at 9:30am and does her circuit rounds with pilgrims following her. She's then taken home and shackled between 12:00 and 4:00 pm. She's taken back to the temple for her evening rituals at 6:30pm and 7:30pm. At the Temple she must stand on a concrete floor. By her side is her Mahout with his ever present "ankush" (a metal bull hook) to ensure her compliancy.

She is not a God, yet she is a slave to religion. She has been denied her right to live a natural life......she is Lakshmi, a captive elephant!
At the end of her day she is shackled again at her owner's home. Chained and alone, she has a few hours respite before she is forced to do it all over again....day after day....year after year!
This is no life for such a beautiful creature, she should be able to move freely but she is shackled with chains. Elephants are highly emotional, they mourn their dead and they are extremely compassionate to each other. Elephant daughters can stay with their mothers for up to fifty years. Instead, Lakshmi is exploited (as are hundreds of elephants also suffering in India under the guise of religion) she earns the Temple a lot of money, from both the tourists and the locals. Place a coin into the snout of her trunk and after she hands it to her master, she gives you a tap on your head.

The film "Gods in Shackles" shows the true horrific abuse these elephants are forced to suffer.
"Kerala has some 600 captive elephants, the vast majority of which are males. These animals are shackled, tortured, beaten or starved on a daily basis. Between 2012 and 2015 175 died and so far this year, eight have perished, including a temple elephant named Keshavankutty." (The 55-year-old tusker had pulmonary disease and digestive disorders and was denied a proper diet and veterinary care. According to reports, the elephant was so hungry he was seen eating sand two days before he collapsed and died.)

It was reported on June 9, 2015 that the Animal Welfare Board of India (AWBI) sent a report to the Conservator of Forests and Chief Wildlife Warden, Puducherry, recommending that Lakshmi be rehabilitated to a forested sanctuary owing to concerns about her health, and also pointing to "illegal ownership." The report states that she displays behaviour typical of mental stress and that she suffers from footrot on all feet.

Lakshmi has had no opportunity to go to a retreat and interact with other elephants. There is talk of artificial insemination one day as she is of an age where she can reproduce. Sometimes she trumpets, mostly when she is scared. She doesn't like loud or sudden noises and during Diwali (ancient Hindu Festival) she was unable to sleep for two nights because of the fireworks. She is also scared of horns (this would add to her mental anguish).

"These intelligent, sensitive animals are captured, trained, and exploited for profit illegally with impunity. Just in March 2016 the Kerala state government discovered more than 289 elephants without ownership certificates, but it granted the owners amnesty. This has been rejected by the Supreme Court of India."

Please help to fight for Lakshmi, help her to gain her freedom. She mustn't be forced to endure a lifetime of such tortuous unnatural limitations.

REF:  LAKSHMI THE TEMPLE ELEPHANT TO BE RELEASED TO A FORESTED SANCTUARY IMMEDIATELY.

We the undersigned respectfully request that the President Thiru. Ramachandran V, Arulmigu Manakula Vinayagar Temple Puducherry India take all necessary steps to release Lakshmi from The Temple and allow her to live the remainder of her life at a sanctuary.

We also respectfully request assistance from the Prime Minister, Indian Government, PETA, Tourist and Welfare Agencies in ensuring that Lakshmi is released immediately.

There has already been a report dated June 9, 2015 that the Animal Welfare Board of India (AWBI) had sent a report to the Conservator of Forests and Chief Wildlife Warden, Puducherry, recommending that Lakshmi be rehabilitated to a forested sanctuary owing to concerns about her health, and also pointing to “illegal ownership.” The report states that she displays behaviour typical of mental stress and that she suffers from footrot on all feet.

It is now August 2016 and no efforts have been undertaken in this regard.

Lakshmi is suffering. She has suffered too long. Tourists to your beautiful country are becoming aware of the plight of these magnificent creatures and it is in turn distressing to them as they realise the full extent of this suffering.Please use your influence to ensure that the recommendation already made by the AWBI for Lakshmi is undertaken. Her health would have continued to deteriorate over the past year.

We started a petition ‘DEMAND IMMEDIATE RELEASE OF LAKSHMI THE TEMPLE ELEPHANT TO A FORESTED SANCTUARY’ on July 26, 2016 and have now gathered 12,175 signatures. This petition will remain in circulation and we will continue fighting until Lakshmi is released.

We thank you for your time.

Supporters from around the world on behalf of Lakshmi