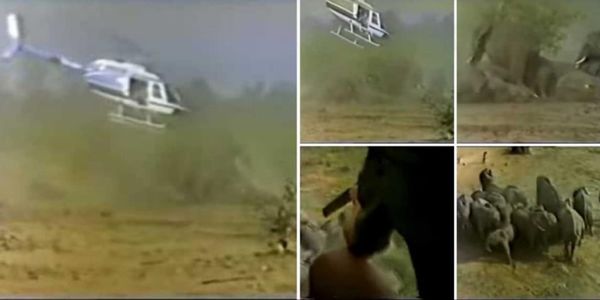 PRESIDENT MASISI, TODAY THERE ARE NO EXCUSES TO APPLY INEFFECTIVE STRATEGIES AND MASSACRE ELEPHANTS IN BOTSWANA

WE URGE PRESIDENT MASISI TO PROTECT BOTSWANA`S ELEPHANTS FROM MASS KILLING STRATEGIES. ALSO, TO SUPPORT THE LOCAL COMMUNITIES THROUGH THE IMPLEMENTATION OF SOCIAL DEVELOPMENT POLICIES, ACCORDING TO THE MOST MODERN THEORIES. WE ASK THE PRESIDENT TO TREND IN CONSERVATION AND LEAD WITH DIGNITY ONE OF THE MOST BEAUTIFUL AND ECOLOGICALLY RICH PLACES ON EARTH.

While scientists across the globe are warning our society for having already entered the 6th mass extinction, since wildlife is dying at a rate comparable only to the era when dinosaurs went extinct 60 million years ago, we believe that Botswana is one of the last elephant paradises on earth and this heritage must be protected as a matter of priority and at all costs.

Instead, in order to address some voters` dissatisfaction, President Masisi is planning to reverse the country`s conservation strategies and to embrace one of the most destructive set of normative in decades, to aggressively reduce elephant population across all protected areas. The "Social Dialogue Report", the document to be approved, includes, among others:

The herd culling and the turning of global iconic symbols into dog food are sufficient reasons for a strong international condemnation.

We believe that Botswana`s elephants must be protected and the local people supported. Conservation has been becoming more and more an interdisciplinary science and the inclusion of the social dimension in conservation have been considered more and more relevant and finally, key. More than election propaganda President Masisi could seek for concrete and well-structured strategies in favour of social inclusion and development, all for Botswana`s and his electors` benefit.

Many questions have been raised on this "Report" by the scientific community, by NGOs and by international wildlife and environmental advocates.

In particular, referring to Botswana`s rural conflict with elephants, it has been demanded more transparency on

As soon as the results of the survey were published, the government denied such results and the permit to Elephants Without Borders for continuing the research, was revoked.

So, is it really necessary to control the elephant population of Botswana? And if it is, why adopting outdated and globally condemned strategies?

Until a few years ago, it was believed that contraception would have been an expensive procedure to manage population on a large scale and this strategy would have been suitable only for small and fenced areas; on the contrary experts on the field, as elephant contraception pioneer Delsink, with 20 years' experience in Africa, are now claiming that using contraception is not only more effective and ethically acceptable, but cheaper than culling and absolutely applicable on large scale.

In 2008 a culling project, including taking on site the recovery trucks, the crane trucks and the ground teams, was quoted 550 dollars per elephant in South Africa, while contraception was quoted 100 dollars only, including the darting, the vaccine and the helicopter time. The more elephants are treated, the more the costs are diluted. Contraception needs a yearly boost but also culling must be regularly repeated. If private land owners are happy to personally invest in contraception in South Africa, it`s because this technique works and it's economically valid. In large areas, elephants have a high fidelity of their home winter/summer ranges and their migratory corridors, so it is possible to assess their behaviours, map their ranges and dart them accordingly, even on very large scale. The larger is the number, the more efficient this method is.

TODAY, WITH THE KNOWLEDGE WE HAVE OF ELEPHANTS AND THEIR PHYSIOLOGICAL AND SOCIAL COMPLEXITY, THERE IS NO EXCUSE TO IGNORE THE RECCOMMENDATION OF THE SCIENTIFIC INTERDISCIPLINARY COMMUNITY AND PROCEED WITH A MASSACRE.

To learn more about elephant culling and how it was done and about all the implications, including the processing into canned food, see the video of a culling operation in 1970 in the Kruger National Park:

Care2
PRESIDENT MASISI, TODAY THERE ARE NO EXCUSES TO APPLY INEFFECTIVE STRATEGIES AND MASSACRE ELEPHANTS IN BOTSWANA
SHARETWEET