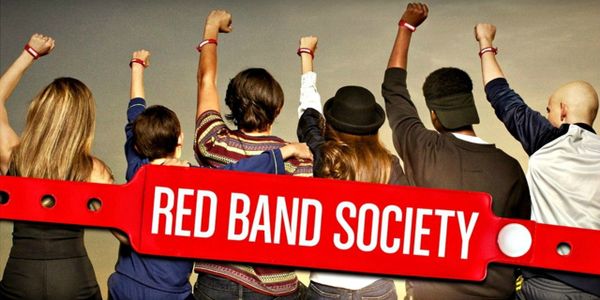 As most of you know, Red Band Society is a teen drama and a remake of Spanish series entitled "Polseres Vermelles". This show is about a group of teenagers who live together as patients with different types of illnesses in a pediatric ward in Ocean Park Hospital. This show basically demonstrates every teenager's struggles in life when battling a life-threatening illness such as anorexia, cancer, heart failure, cystic fibrosis, and other serious illnesses that any adolescent is currently going through. Also, in this show, these teenagers form a captivating bond by using the representation of red hospital bands and encounter challenges not only with their illness, but with life in general. From what I've seen in this show and many other teen dramas similar such as Degrassi: The Next Generation, Red Band Society's storylines are emotional, funny, and dramatic. Combine these qualities together and you have a really good, flawless teen TV drama as successful as Degrassi: The Next Generation and that's exactly what Red Band Society is. If there's a scene, character, or storyline that directly relates to what a teenager is going through and they're drawn to that scenario, then directors know that they achieved their goal to bring a crowd a teens in the same position as the character and lets them know that they are not alone and they are here to help and provide their support. However, that's not the main focus for most TV broadcasting companies. They are more concerned about ratings, reviews, and money. If a TV show doesn't provide an adequate amount of ratings and don't impress the critics or viewers, then the show ends up getting cancelled due to lack of interest, poor ratings, or terrible reviews from the critics. No TV director deserves that kind of criticism for a project they worked so hard to make and ends up being eaten alive by horrible comments like "I sure hope they pull the plug on this show, because this show sucks!". Therefore, if you want to keep Red Band Society and make it a successful hit on Fox, do whatever you can to do so: watch the show (if you can't, record it and watch it later or leave the TV running through the show on that channel and watch it later online the next day), leave a positive on any resource you find on online, rate the show 5 stars, 10/10, or whatever kind of rating system websites that may have with Red Band Society mentioned. Help support Red Band Society! Also, spread the word on social media: Twitter, Facebook, Tumblr, YouTube comments, whatever it's out there right now. #SupportRedBandSociety, #SupportRed, #SupportRedBand. Anything! I don't care what you do. Just spread the word and show your support. I apologize if this has turned into a long dissertation, but I've read online that Red Band Society is possibly going to be cancelled if the ratings don't improve and I don't want this show the suffer the same fate as all the other shows that had little to no potential based on the comments from the critics. After watching the last five episodes of this show, I know that this show has potential to becoming a huge hit for young teens nationwide and worldwide, thanks to Steven Spielberg and all of the directors, writers, and creators of Red Band Society. Therefore, I need all the help I can get from you and all the fans of Red Band Society to keep the show alive. I'm not going to let the terrible critics, haters of the show, or trolls win this fight. So, if you're with me, spread the word and sign this petition.