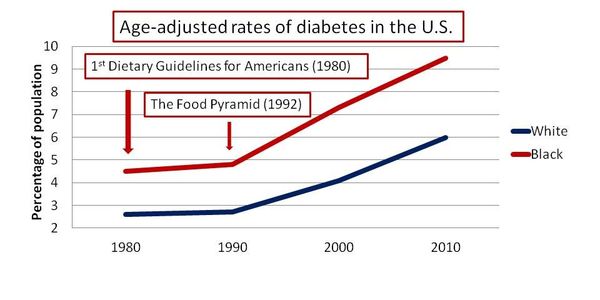 Congressional law mandates that federal dietary guidance be “for the general public” and “based on the preponderance of the scientific and medical knowledge” currently available.  As the 2015 Dietary Guidelines for Americans (DGA) are being written, we ask that they do not perpetuate the same federal nutrition guidance that has persisted for nearly four decades, guidance that does not fulfill the legal mandate and has not achieved positive health outcomes for the American public.  These recommendations:

If you think U.S. dietary recommendations are confusing, frustrating, and ineffective, this your chance to speak out against the direction the current 2015 Dietary Guidelines are taking and offer an alternative approach.

At the conclusion of the sixth meeting of the 2015 Dietary Guidelines Advisory Committee (DGAC), we write to express concern about the state of federal nutrition policy and its long history of failure in preventing the increase of chronic disease in America. The tone, tenor, and content of the DGAC’s public meetings to date suggest that the 2015 Dietary Guidelines for Americans (DGA) will perpetuate the same ineffective federal nutrition guidance that has persisted for nearly four decades but has not achieved positive health outcomes for the American public.

We urge you to adhere to the initial Congressional mandate that the DGA act as “nutritional and dietary information and guidelines for the general public” and are “based on the preponderance of the scientific and medical knowledge which is current at the time the report is prepared.”

Below we lay out specific objections to the DGA:

As you prepare to consider the 2015 DGAC’s recommendations next year, we urge you to fulfill your duty to create the dietary foundation for good health for all Americans by focusing on adequate essential nutrition from whole, nourishing foods, rather than replicating guidance that is clearly failing.

The DGA have contributed to the rapid rise of chronic disease in America.

In 1977, dietary recommendations (called Dietary Goals) created by George McGovern’s Senate Select Committee advised that, in order to reduce risk of chronic disease, Americans should decrease their intake of saturated fat and cholesterol from animal products and increase their consumption of grains, cereal products, and vegetable oils. These Goals were institutionalized as the DGA in 1980, and all DGA since then have asserted this same guidance. During this time period, the prevalence of heart failure and stroke has increased dramatically. Rates of new cases of all cancers have risen.  Most notably, rates of diabetes have tripled.  In addition, although body weight is not itself a measure of health, rates of overweight and obesity have increased dramatically.  In all cases, the health divide between black and white Americans has persisted or worsened.

While some argue that Americans have not followed the DGA, all available data show Americans have shifted their diets in the direction of the recommendations: consuming more grains, cereals, and vegetable oils, while consuming less saturated fat and cholesterol from whole foods such as meat, butter, eggs, and full-fat milk.  Whether or not the public has followed all aspects of DGA guidance does not absolve the U.S. Departments of Agriculture (USDA) and Health and Human Services (DHHS) from ensuring that the dietary guidance provided to Americans first and foremost does no harm.

The 1977 Dietary Goals marked a radical shift in federal dietary guidance.  Before then, federal dietary recommendations focused on foods Americans were encouraged to eat in order to acquire adequate nutrition; the DGA focus on specific food components to limit or avoid in order to prevent chronic disease.  The DGA have not only failed to prevent chronic disease, in some cases, they have failed to provide basic guidance consistent with nutritionally adequate diets.

Following USDA and DHHS guidance should not put the most vulnerable members of the population at risk for nutritional inadequacy.  DGA recommendations should be emphasizing whole foods that provide essential nutrition, rather than employing a reductionist approach based on single food components to exclude these foods from the diet.

The DGA’s narrow approach to food and health is inappropriate for a diverse population.

McGovern's 1977 recommendations were based on research and food patterns from middle class Caucasian American populations.  Since then, diversity in America has increased, while the DGA have remained unchanged.  DGA recommendations based on majority-white, high socioeconomic status datasets have been especially inappropriate for minority and low-income populations. When following DGA recommendations, African American adults gain more weight than their Caucasian counterparts, and low-income individuals have increased rates of diabetes, hypertension, and high cholesterol.  Long-standing differences in environmental, genetic and metabolic characteristics may mean recommendations that are merely ineffective in preventing chronic disease in white, middle class Americans are downright detrimental to the long-term health of black and low-income Americans.

The DGA plant-based diet not only ignores human biological diversity, it ignores the diversity of American foodways.  DGA guidance rejects foods that are part of the cultural heritage of many Americans and indicates that traditional foods long considered to be important to a nourishing diet should be modified, restricted, or eliminated altogether:  ghee (clarified butter) for Indian Americans; chorizo and eggs for Latino Americans; greens with fatback for Southern and African Americans; liver pâtés for Jewish and Eastern European Americans.

Furthermore, recommendations to prevent chronic disease that focus solely on plant-based diets is a blatant misuse of public health authority that has stymied efforts of researchers, academics, healthcare professionals, and insurance companies to pursue other dietary approaches adapted to specific individuals and diverse populations, specifically, the treatment of diabetes with reduced-carbohydrate diets that do not restrict saturated fat.  In contradiction of federal law, the DGA have had the effect of limiting  the scope of medical nutrition research sponsored by the federal government to protocols in line with DGA guidance.

The DGA are not based on the preponderance of current scientific and medical knowledge.

The science behind the current DGA recommendations is untested and inconsistent. Scientific disagreements over the weakness of the evidence used to create the 1977 Dietary Goals have never been settled. Recent published accounts have raised questions about whether the scientific process has been undermined by politics, bias, institutional inertia, and the influence of interested industries.

In all of these cases, contradictory evidence has been ignored in favor of maintaining outdated recommendations that have failed to prevent chronic disease.

More generally, "intervention studies, where diets following the Dietary Guidelines are fed long-term to human volunteers, do not exist," and food patterns recommended by the DGA “have not been specifically tested for health benefits."  The observational research being used for much of the current DGAC activities may suggest possible associations between diet and disease, but such hypotheses must then be evaluated through rigorous testing.  Applying premature findings to public health policy without adequate testing may have resulted in unintended negative health consequences for many Americans.

The DGA have overstepped their original purpose.

The DGA were created to provide nutrition information to all Americans. However, the current 112-page DGA, with 29 recommendations, are considered too complex for the general public and are directed instead at policymakers and healthcare professionals, contradicting their Congressional mandate.

Federal dietary guidance now goes far beyond nutrition information. It tells Americans how much they should weigh and how to lose weight, even recommending that each American write down everything that is eaten on a daily basis. This focus on obesity and weight loss has contributed to extensive and unrecognized "collateral damage":  fat-shaming, eating disorders, discrimination, and poor health from restrictive food habits.  At the same time, researchers at the Centers for Disease Control have shown that overweight and obese people are often as healthy as their "normal" weight counterparts.  Guidance related to body weight should meet individual health requirements and be given by a trained healthcare practitioner, not be dictated by federal policy.

The DGA began as an unmandated consumer information booklet.  They are now a powerful political document that regulates a vast array of federal programs and services, dictates nationwide nutrition standards, influences agricultural policies and health-related research, and directs how food manufacturers target consumer demand.  Despite their broad scope, the DGA are subject to no evaluation or accountability process based on health outcomes. Such an evaluation would demonstrate that they have failed to fulfill their original goal:  to decrease rates of chronic disease in America.

Despite this failure, current DGAC proceedings point to an expansion of their mission into sustainable agriculture and environmental concerns.  While these are important issues, they demonstrate continued "mission creep" of the DGA.  The current narrow DGA focus on plant-based nutrition suggests a similarly biased approach will be taken to environmental issues, disregarding centuries of traditional farming practices in which livestock play a central role in maintaining soil quality and ecological balance.  Instead of warning Americans not to eat eggs and meat due to concerns about saturated fat, cholesterol, and obesity, it is foreseeable that similar warnings will be given, but for "environmental" reasons.  This calls for an immediate refocusing of the purpose of the DGA and a return to nutritional basics.

As our nation confronts soaring medical costs and declining health, we can no longer afford to perpetuate guidelines that have failed to fulfill their purpose.  Until and unless better scientific support is secured for recommendations regarding the prevention of chronic disease, the DGA should focus on food-based guidance that assists Americans in acquiring adequate essential nutrition.

Shifting the focus to food-based guidance for adequate essential nutrition will create DGA that:


It is the duty of USDA and DHHS leadership to end the use of controversial, unsuccessful and discriminatory dietary recommendations. USDA and DHHS leadership must refuse to accept any DGA that fail to establish federal nutrition policy based on the foundation of good health:  adequate essential nutrition from wholesome, nourishing foods.  It is time to create DGA that work for all Americans.