PROCLAMATION IN DEFENSE OF WIRIKUTA

This petition is emitted by the Wixarika People of the three states of Jalisco, Nayarit and Durango, representing the Wixarika Union of these states.
Recalling that the Wixarika People (also known as Huicholes) have, since immemorial time, participated in a pilgrimage to the sacred region of Wirikuta, recreating the long path that our ancestors walked during the fomation of the world to the place where the sun was born in the semi-desert region of Real de Catorce.
Considering that the prayer in Wirikuta is for all living beings on this planet to see their lives protected, so that their ancient Wixarika culture be mantained and not disappear, and so that the keys to their wisdom and the candles of life that give sense to the Wixarika identity be renewed.
Analizing the North American Free Trade Agreement (NAFTA), particularly the accord between Mexico, the United States and Canada deriving in orders such as the Mining Law that have paved the way for their sacred sites in the Desert of Real de Catorce to become the object of 22 concesions granted to the transnational mining company First Majestic Silver, of Canadian origin, totaling 6,326 hectares that encompass their sacred sites.
Considering that the damage would irreversibly affect the springs in which they collect sacred water (by the risk of pollution by cyanide and the drying of large quantities of water that would be used by the mining industry), and will affect 16 population centers in the region.
And evaluating that the mining project of First Majestic Silver violates the rights that they have as a recognized group under Convention 169 of the International Labor Organization (ILO); violates the established Management Program for the Protected Ecological Area of Wirikuta that encompasses almost 70% of the mining concession and of which, they, the Wixarika People, are part of the Administrative Council; fails to comply with the accord established by the General Law for the Ecological Balance and Protection of the Enviroment; the Enviromental Law of the state of San Luis Potosi; as well as a sizable quantity of applicable Mexican laws:

WE MANIFEST OUR PROFOUND REJECTION TO THE MINING PROJECT OF TRANSNATIONAL COMPANY FIRST MAJESTIC SILVER IN THE DESERT OF REAL DE CATORCE, being that their sacred sites are a form of patrimony that can not be monetarized and that hold an unquantificable value for them, their children, their grandchildren and all future generations of Wixarika People.

WE DEMAND THAT THE MEXICAN STATE INMEDIATLY IMPLEMENTS EFFECTIVE STRATEGIES THAT LEAD TO THE IMPROVED CONDITIONS OF THE INHABITANTS OF WIRIKUTA, AND THAT THESE BE PRPOPOSALS IN HARMONY WITH THE ENVIROMENT, AND NOT DESTRUCTIVE PROPOSALS SUCH AS THE MINE WHEREBY HUMBLE FARMERS ARE PLACED BETWEEN A ROCK AND HARD PLACE BEING OFFERED WORK IN EXCHANGE FOR THE DESTRUCTION OF THEIR PATRIMONY. 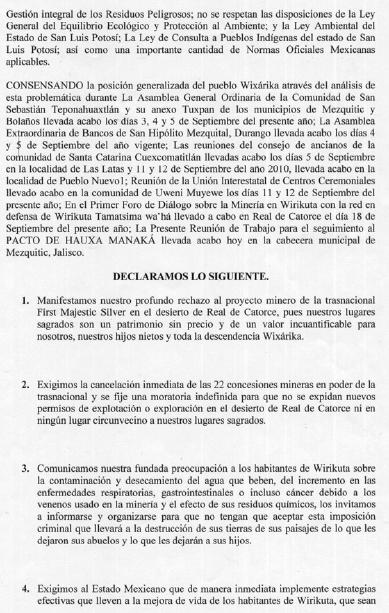 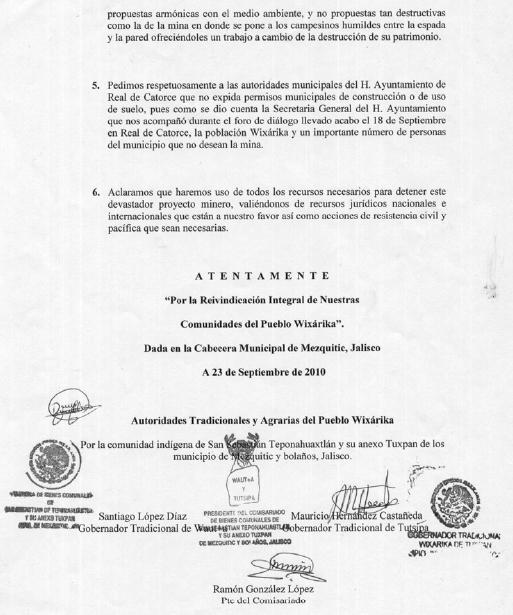 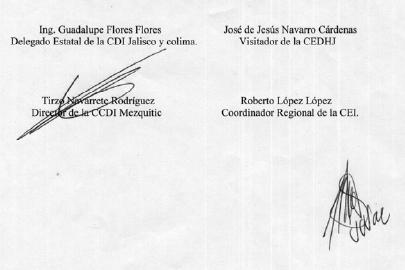 read petition letter ▾
We the udersigned support the following proclamation and exhort Mexican and Canadian goverments, as well as national and international organizations, to act in favor of the law and the protection of the natural resources and health issues adressed in it. 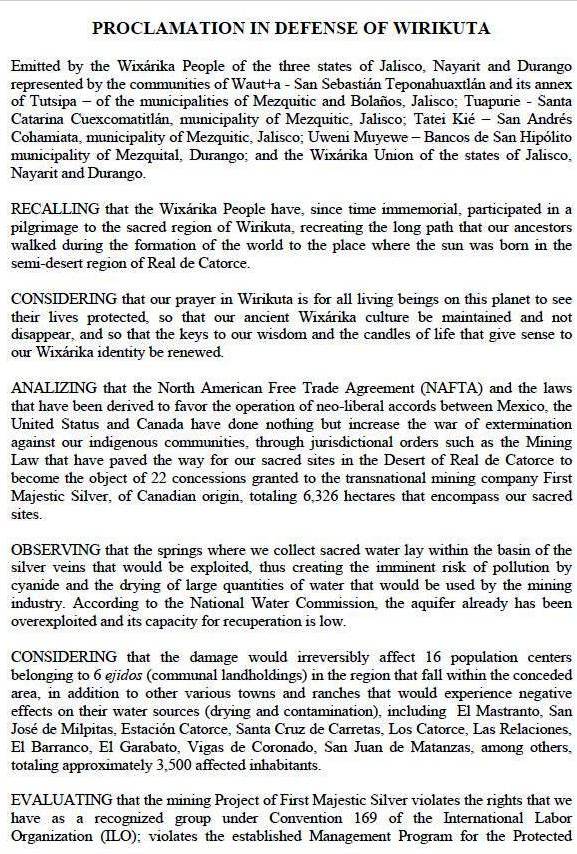 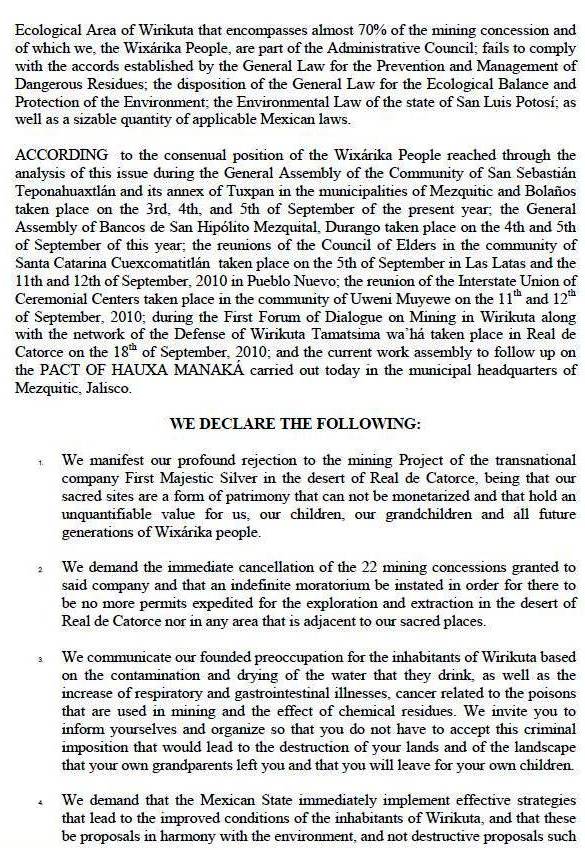 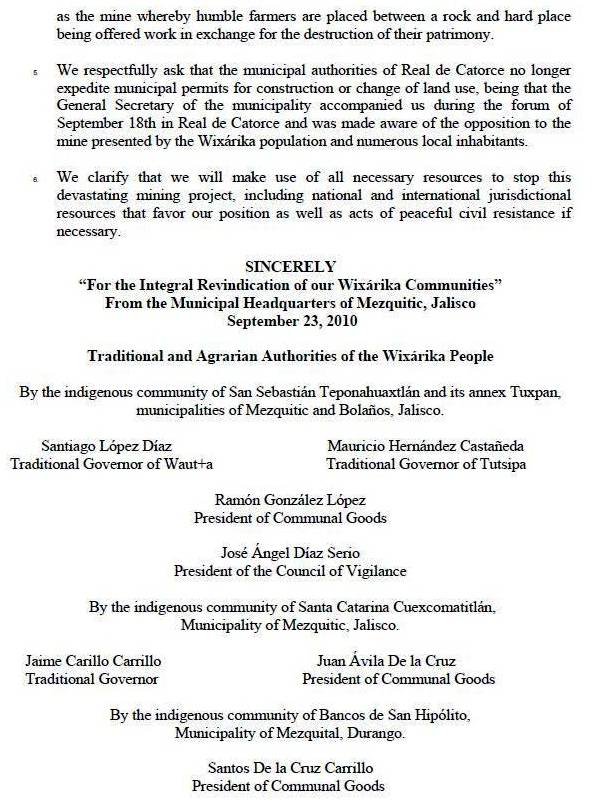 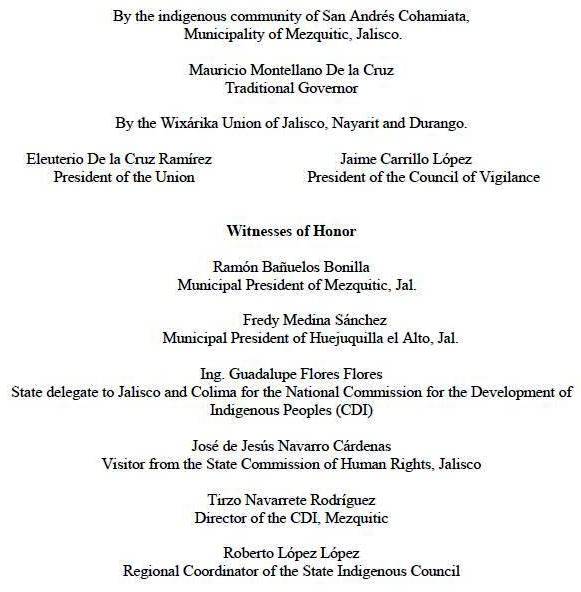