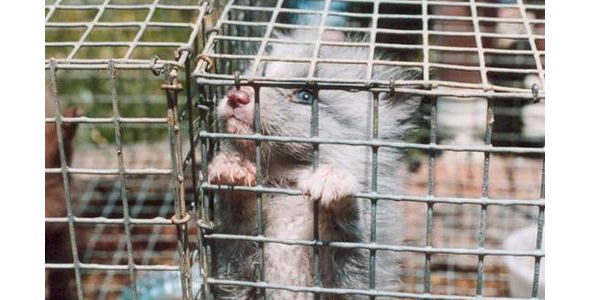 Stop the Dog and Cat Fur and Meat Trade!

Would You Wear Your Dog?
When PETA conducted an undercover investigation into the dog and cat fur trade in 2005, investigators went to an animal market in Southern China and found that dogs and cats were languishing in tiny cages, visibly exhausted. Some had been on the road for days, transported in flimsy wire-mesh cages with no food or water. Animals were packed so tightly into cages that they could not move. Because of the cross-country transport in such deplorable conditions, our investigators saw dead cats on top of the cages, dying cats and dogs inside the cages, and cats and dogs with open wounds. Some animals were lethargic, and others were fighting with each other, driven insane from confinement and exposure. All of them were terrified.

Investigators reported that up to 8,000 animals were loaded onto each truck, with cages stacked on top of each other. Cages containing live animals were tossed from the tops of the trucks onto the ground 10 feet below, shattering the legs of the animals inside them. Many of the animals still had collars on, a sign that they were once someones beloved companions, stolen to be bludgeoned, hanged, bled to death, and strangled with wire nooses so that their fur can be turned into coats, trim, and trinkets.

Undercover investigators from Swiss Animal Protection/EAST International toured fur farms in China Hebei Province and found that foxes, minks, rabbits, and other animals were pacing and shivering in outdoor wire cages, exposed to everything from scorching sun to freezing temperatures to driving rain. Disease and injuries are widespread on these farms, and animals suffering from anxiety-induced psychosis chew on their own limbs and repeatedly throw themselves against the cage bars.

The globalization of the fur trade has made it impossible to know where fur products come from. Skins move through international auction houses and are purchased and distributed to manufacturers around the world, and finished goods are often exported. Even if a fur garments label says that it was made in a European country, the animals were likely raised and slaughtered elsewhere possibly on an unregulated Chinese fur farm.

China,kills hundreds and thousands of innocent animals each year,for their fur,including animals such as dogs,cats,rabbits,minks,foxes etc,who are skinned alive.Even after skinning some animals who still have hope for survival live a few minutes more
Thanking You,
Sincerely,
Vibhor Sharma Kaushal