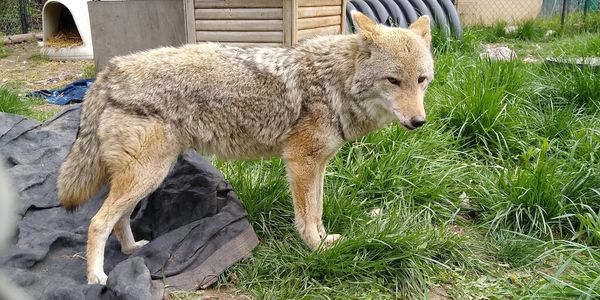 This is Luna. She is now 15 years old. Tomi Tranchita is desperately trying to rearrange her life to be with Luna in another state after 2 years in Illinois courts trying to get Luna home. Luna and her 3 pack mates lived with Tomi for 13 years under USDA federal exhibitor licensing. Tomi passed federal inspections year after year and helped educate the public about peaceful coexistence all the while discouraging people from attempting to keep any wildlife as a pet. The non-releasable ambassador educational coyotes were contained in 3000 square feet of escape proof enclosures. There was never an escape or incident of any kind in 13 years. All was well until a new neighbor who happened to be an Illinois Department of Natural Resources officer made it his mission to conduct what he named Operation Dog Catcher and remove the beloved coyotes claiming Illinois State hunting codes were violated. Hunting codes do not and should never apply to a sanctuary situation. But Tomi's new neighbor, sergeant Joshua Mooi, conservation police officer for the Department of Natural Resources in Illinois charged Tomi with every violation he could think of.

Tomi was not allowed to utilize her emergency USDA evacuation plan which would have gotten all four coyotes to a safe haven and Tomi was not allowed to gently crate her coyotes for their safety.
Instead, Mooi ordered the coyotes be shot with tranquilizer darts. They were dragged away gasping for air on chokehold poles of which Tomi took video that sparked outrage on social media. The coyotes were terrorized by Mooi with the help of Cook County Animal Control. Coyotes that had only known kindness from humans for their entire lives were chased and their hiding places flipped over as they tried to escape the men with guns who even laughed at the situation. Tomi was horrified and tried to do anything she could, begging to purchase whatever state permits Mooi thought she needed.
But he would not allow it, he was determined to get the Coyotes out of her property that day. He stated he was in a hurry to leave on his vacation and didn't have time to let Tomi humanely crate them. He also told Tomi that once she got the proper state permits she could get new coyotes but that she would never see her four again, she should be thankful she had them for 13 years but now it was over, and that she could call a mental health hotline because she appeared upset!

That day started at 7:00 a.m. with banging on her doors and windows and Mooi yelling "we're taking your animals now". Three coyotes, Sandy, Bella and Peytah were found dead after only 2 to 3 weeks in state custody at Flint Creek Wildlife. They had been given multiple vaccinations by Flint Creek shortly after they were removed from their 13 year safe haven in Tomi's care. The state claimed one of the coyotes tested positive for distemper but this makes no sense since they were vaccinated for distemper by Flint Creek. Multiple veterinarians including those from USDA, had told Tomi to never give the coyotes vaccinations that were approved for dogs and NOT wild canids, as it could make them seriously ill or cause their deaths.

What followed has been a circus in the courtrooms and ultimately the state agency Department of Natural Resources for Illinois is sticking to their claim that the only way Luna could be returned, is if Tomi was operating a hound running facility where coyotes are used as LIVE BAIT. PENNING, or Hound Running has been compared to dog fighting which is now a federal crime. It is the sickeningly cruel practice of trapping wildlife and throwing it in pens or letting it loose on open land for a pack of hound dogs to chase and hunt the prey animal.

This is the part of the story where everyone shakes their head. How on Earth can the state of Illinois demand that a federally licensed exhibitor hold a state permit to conduct such brutal hunting training on an elderly coyote that has been worked with every day to be gentle and accessible for public viewing? It doesn't make sense and it violates USDA humane standards of care.

Further, there are many others in Illinois that are USDA licensed just like Tomi, and their coyotes are fine, not taken by idnr, and these facilities are not demanded to hold a Hound running permit as only Tomi is. The Hound running permit requires 160 acres for training dogs to hunt coyotes, so the state says Tomi does not qualify because of acreage. Yet the USDA licensing requires that the coyotes be contained in escape proof enclosures which Tomi has. The state also said that Tomi would not have to participate in the Hound running activity but she needs the permit to be legal. Yet they will not issue the permit because she doesn't have the acreage necessary to participate in said activity which they have conceded she would not have to participate in! Confusing? Ludicrous? Yes.

Tomi and Luna continue to suffer the separation from one another two years after the brutal seizure. Tomi was never allowed to see Luna's 3 packmates or view their bodies. Luna is 15 years old as of April 2021 and her time is running out. Coyotes in captivity live an average of 15 to 16 years. Tomi and Luna deserve whatever time Luna has left on this Earth together in peace where Luna can totally relax with her one bonded caretaker. Please sign and share our petition and like the Bringlunathecoyotehome Facebook page or follow the Tomi Tranchita profile on Facebook for more information. If you can spare a few minutes, give Gov JB Pritzker and Illinois Department of Natural Resources in Springfield, Illinois, a phone call and ask them to kindly correct the situation that one rogue officer has created, end the torturous separation of two very traumatized victims, and help bring Luna the coyote home to Tomi once and for all.