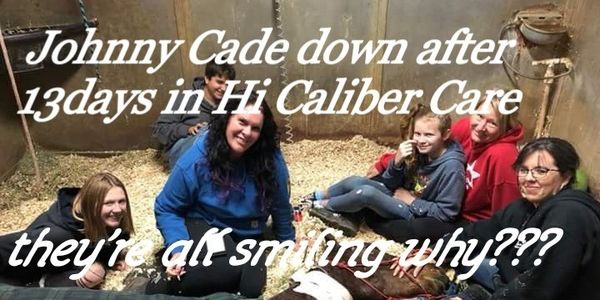 From the group "STANDING TOGETHER FOR THE HORSES" ...RE: Petition requesting San Diego County to enforce their permit laws instead of allowing blatent disregard of citation issued with regulations.  RE: Hi Caliber Horse Rescue... Immediate attention is needed to demand investigation into and to STOP the "in our opinion", continuous fraud, neglect, and abuse practiced at the Hi Caliber Horse Rescue located at 11223 Calle Oro Verde, Valley Center, California, 92082, County of San Diego, and by founder, Michelle Cochran aka Michelle Knutilla, and all Board Members including Manager Jen Tyler, Kat Tarnowski, Romney Snyder, Ingrid Abrash, Brittany Lindell, Kelsey Nye, and Richie Price. We are prepared to show factually-based cause as follows:

1) County issued citation for not having adequate permit for the extreme amount of horses Hi Caliber Horse Rescue has on property, but still have allowed her to continue to stay out of compliance, as she continues to bring more horses in, with no regard to citation received. We are asking the county to uphold regulation and enforce their permit laws and follow up on citation given for adequate permit for compliance. Without this, horses continue to suffer and more deaths HAVE occurred since citation. (102 dead last documented count.)

2) Practicing medicine without a license (which, in turn, has caused continued torture and suffering and death, with over 102 animals dead, many by bullet, after they solicited donations for the care of said animal. In live videos Hi Caliber's founder, Michelle Cochran/Knutilla has implicated several veterinarians, falsifying actual veterinary care and euthanisia recommendations from vets in her unethical activities.

3) Investigative actions are needed as this non-profit 501(c)3 solicits donations to the sum of reported by owner, $85,000 per month  budget and preys on the decency of the public, villagers and uneducated/unknowlegable horse/animal lovers in our opinion by using provable false diagnosis and prognosis and continued pleas with untrue transparency and implicated veterinary care that did not exist but that donators wouldn't know. This is NOT an example of a legitimate horse rescue, but the villagers and donators believe it is.  We need to show the villagers and donators the truth behind the so called transparency and beyond the live videos.

4) Investigation is needed to identify the unsanitary areas, poor manure management, including 2 tarp filled pick up areas for rendering, pick up for at times piled dead animals throughout the year, obvious ill-managed property with insufficient quarantine space for weekly intakes, adding on to the approximately 200 animals (proper count as of 01/07/18 - reported 192) on no more than AND ONLY LESS THAN 12 USABLE ACRES in our opinion.

We are a growing group of people in San Diego County and surrounding areas, and throughout the state of California, as well as horse lovers and concerned citizens nationally petitioning for change and requesting the county to protect their permit laws and regulations for horses. We don't believe the heart of America would be pleased with California ignoring the unprofessional, deceiving, corruption being displayed in your County of San Diego...State of California. By signing this petition We ARE Standing Together For The Horses...