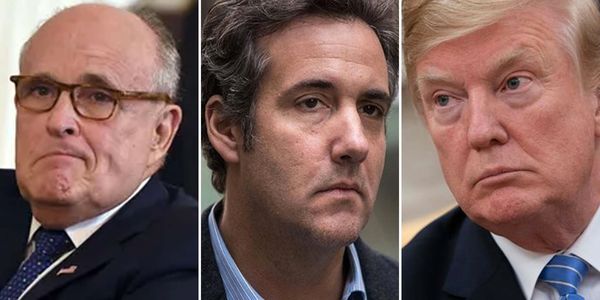 Indict Trump and Giuliani For Witness Tampering Against Michael Cohen

Amid the development that former Trump lawyer Michael Cohen has indefinitely postponed his congressional testimony, citing "ongoing threats against his family from President Trump," there is now sufficient grounds to indict him for witness tampering.

According to Lanny Davis, Cohen's lawyer, Trump and his attorney, Rudy Giuliani, have yet to stop levying threats against Cohen. The duo even undertook an effort to divert attention from their own legal troubles instead to Cohen's father-in-law in a blatant effort to intimidate Cohen's family.

"Calling out a man's father-in-law and wife in order to intimidate the witness is not fair game," said Lanny Davis. "Mr. Giuliani has committed a crime or at least should be indicted for that crime on the face of what he said."

In fact, Norman Eisen, a senior fellow at the Brookings Institution, called the moves by Trump and Giuliani "very close to the statutory definition of witness tampering." Per the Washington Post, "It's a federal crime for an individual to intimidate, threaten or 'corruptly persuade' another person with the goal of influencing or preventing his or her testimony."

Trump may think that his mob tactics can work at the highest levels of government, but no one is above the law. We, the undersigned, demand that Trump and Giuliani be indicted for witness tampering—a crime that has been committed in plain sight.