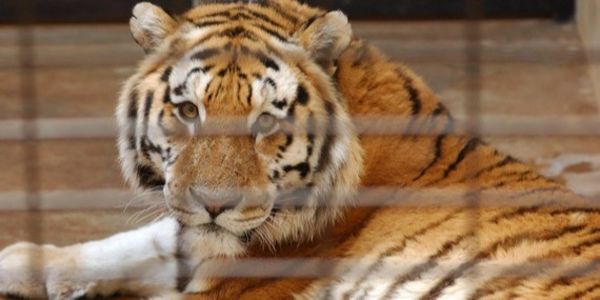 This zoo may have been breeding tigers for slaughter. Thailand must investigate other abusive zoos!

The COVID-19 pandemic has been a terrible emotional, psychological, financial, and physical burden for many of us. Yet for some — particularly caged tigers in Thailand — these hard times have also brought unexpected relief.

This is especially true for the tigers held captive, exploited, and even sold for body parts at the Sriracha Tiger Zoo in Thailand. Founded 23 years ago in 1997, this zoo attracts boatloads of foreign tourists by offering the ability to bottle-feed tiger cubs, take pictures next to full-grown adult tigers, and watch the animals perform. This is already problematic and abusive, but unfortunately, the story gets even worse.

Sign the petition to demand that the Thai government investigate other zoos in their country, including the notorious Phuket Zoo!

Visitors have noticed that the exotic animals at this facility also display signs of surviving serious cruelty. Witnesses have seen staff violently hit the tigers in order to force them to entertain crowds. Other tigers appeared malnourished, drugged, and "too tired to move." When not enduring such traumas, the babies and adults are separated out and both are kept in tiny cages — sometimes even "chained to the ground."

Some visitors had reason to suspect the facilities were potentially also used as a tiger-breeding farm, where tigers were forced to mate in order to produce offspring that would be killed or exported (to be killed at their destination site) — all so that their skin, teeth, bones, and other body parts could be chopped off and harvested for traditional medicines and even wine.

Luckily, the zoo eventually came under official investigation because of these complaints and now, as of May 2021, the zoo is officially CLOSED!

It's beyond relieving that these animals are no longer subjected to such torture. But countless other despicable entertainment-oriented "zoos" exist throughout Thailand. For example, Phuket Zoo (among others) has been accused on multiple occasions of perpetrating animal abuse and neglect — and these allegations need to be looked into NOW.

Of course, while we never want to see animal cruelty perpetuated and profited from, we also don't want workers to lose their jobs — especially during such an economically precarious time. That's why we're additionally asking the Thai government to provide supplemental support for the workers who lose income when such facilities are shut down.

In fact, such assistance could even discourage workers from turning to these zoos as a desperate last-ditch attempt to find employment and feed their families.

Tell the government of Thailand to open thorough investigations into other heinous, abusive zoos and provide assistance for workers who lost their jobs!
Sign Petition
SHAREShare this petition with friends!TWEETEMAILEMBED
Sign Petition
See more petitions:
You have JavaScript disabled. Without it, our site might not function properly.

Care2
This zoo may have been breeding tigers for slaughter. Thailand must investigate other abusive zoos!
SHARETWEET