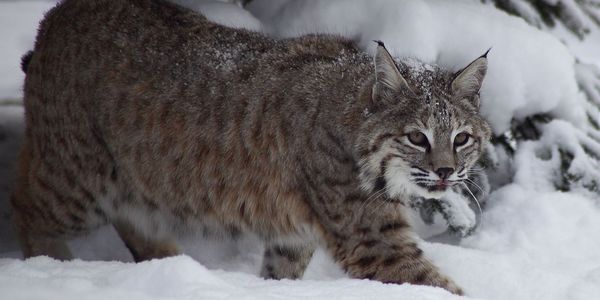 Fur is Not Fashionable - End the Commercial Export of Bobcat Pelts!

Elusive, graceful and wary, bobcats are rarely seen by people. While these solitary felines are sometimes feared and misunderstood, attacks on humans are virtually non-existent, and we benefit from their presence. As mid-sized carnivores, bobcats help control the numbers of rats, mice, squirrels, and other rodents, and they also prey on venomous snakes. Yet in most U.S. states, bobcats are subjected to one of the cruelest forms of legalized for-profit exploitation inflicted on our native wildlife.

The bobcat's beautiful spotted fur has made the species a victim of widespread commercial trapping.  The natural investigative nature of these wildcats is exploited to lure them to torturous deaths.  Steel-jawed traps are still legally used to capture bobcats in the U.S. despite the devices being outlawed in many countries due to the suffering they inflict.  Animals are known to gnaw off paws or toes to escape leg-hold traps. Others may die of starvation, shock, or blood loss.  In the case of trapped bobcats, they are not even allowed a quick death when found, but typically strangled and choked with a wire noose. Again, this is done for the sake of personal profit as trappers would rather not damage the market value of the fur with a bullet hole.  Snares and cages are also used to trap bobcats, which result in similar deaths by choking, either by the device itself or the trapper.  The animals are then skinned and the pelt is tagged and sold and exported to international markets in Europe and Asia, where it is made into expensive, luxury fur coats.

Local bobcat populations can be heavily exploited whenever the market value of these pelts goes up.  An increase in the international export price of the fur leads to a heavy increase in trapping.  While a few states such as New Hampshire and California now prohibit this practice and have laws protecting the wildcats, bobcat hunting/trapping remains legal across most of the country. Trapping is poorly regulated and shows little regard for the welfare or sustainability of bobcats. Some states such as Wyoming and Texas place no limits or quotas on the number of bobcats that can be killed and maintain no count or estimate of how many are around.  Bobcats are resilient animals and are currently not considered endangered, but localized populations can greatly suffer from human pressure.

Fur coats have fallen out of favor in the United States and are no longer considered in-demand within the country. Yet North America kills the largest number of wild animals to fuel the market for fur in other countries. The International Affairs branch of the U.S. Fish and Wildlife Service needs to phase out the commercial export of bobcat fur to other countries. This would decrease the incentive to trap bobcats for profit and protect the animals from being unsustainably exploited when fur prices increase. Bobcats are remarkable animals deserving of our respect, not torture and exploitation.

Resources for more information on this issue: https://wyominguntrapped.org/programs/bobcat-economic-value-study/

Care2
Fur is Not Fashionable - End the Commercial Export of Bobcat Pelts!
SHARETWEET