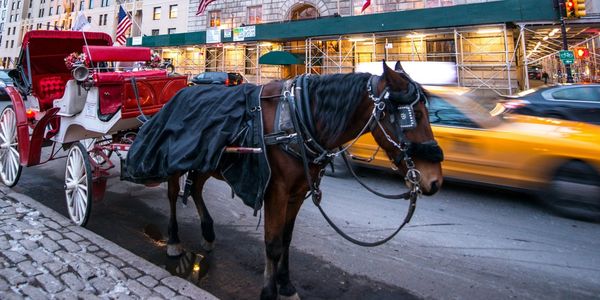 Just recently, New York suffered its latest carriage horse tragedy -- a blood-soaked collision between car-based traffic and an animal at work, forced to labor with a human carriage strapped to its body.

The animal, a brand-new carriage horse named Chief, was lugging passengers around in the chaotic, high-paced area of Midtown when the many busy noises, sights, and smells around him caused him to startle. Then, he rammed at full-speed right into the back of a BMW car.

This is exactly the kind of suffering animal rights activists are trying to prevent by urging authorities to ban horse-drawn carriage rides in New York City. Stand with the horses by signing the petition now!

Chief the horse immediately plummeted to the ground, splattering both the pavement and the carriage behind him with his blood. After desperately struggling to stand up, he eventually fell unconscious, legs kicking violently while he lay on the road.

Then, witnesses say they watched as the BMW driver backed up into the fallen horse before racing off. Left behind were pieces of the carriage, parts of the car, shocked tourists, and poor Chief.

Authorities announced that Chief sustained injuries to his head, right front leg, and his midsection, and that's the last we've heard of him. He disappeared into the Clinton Park Stables and the public has not received any updates.

All of this could have been prevented if New York City would have done the right thing and banned carriage horse rides. Chief is not the first animal to have been injured -- and even killed -- in this way. And unfortunately he will not be the last, unless the city takes action NOW.

A busy, crowded, loud city is no place for a horse, much less when it's filled with zooming cars, intense heat, pollution, and also freezing cold. Tell Mayor Bill de Blasio to ensure horses' safety by signing legislation to end all horse-drawn carriage rides now!
Sign Petition
SHAREShare this petition with friends!TWEETEMAILEMBED
Sign Petition
See more petitions:
You have JavaScript disabled. Without it, our site might not function properly.