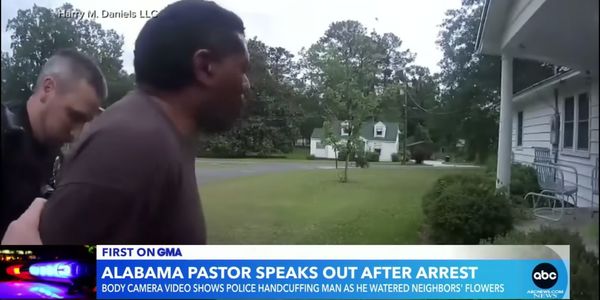 Fire The Officers Who Arrested a Black Man For Watering His Neighbor's Garden!

Apparently in Alabama it is acceptable for police officers to arrest Black men who are watering their neighbor's flowers. Or at least according to the Childersburg Police.

When Pastor Jennings stopped by his neighbor's home to make sure their plants were taken care of while they were on vacation, he could not have imagined he'd be told he was breaking the law. Even after he explained he lived nearby and had been asked to be on the property, the police continued to harass and distrust him. Before the officers took Jennings away in the back of the police car, the nearby woman who had originally called the police even told the officers that she recognized Jennings, and had made a mistake. Yet the police arrested and charged him anyway.

The story is, unfortunately, an all-too familiar one in the United States. Time and time again, Black people -- particularly Black men -- are harassed by police and even arrested, or killed, for simply living their lives. Whether it be barbecuing in the park or watering their neighbor's garden, we know that being Black is treated as a crime in the United States, and there is no reason any police officer who interacts with a person this way should be allowed to keep their job.

The fact that Jennings was charged with "obstructing government operations" should be enough evidence that the police decided they were going to arrest him before they knew any details about the situation. There is no way to undo the harm that this caused this man, but the least the department can do is ensure that the officers involved in this situation are all fired. Since when is it illegal to be a good neighbor? The reality is, it isn't, but these police treated Jennings as if it were illegal to be Black.

Childersburg Police must fire every officer involved in this unlawful arrest. Sign the petition now if you agree!

Care2
Fire The Officers Who Arrested a Black Man For Watering His Neighbor's Garden!
SHARETWEET