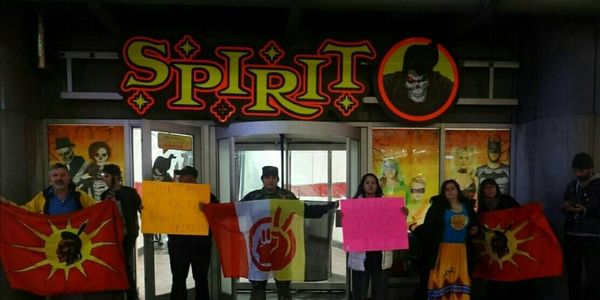 Ban native costumes from being sold in Canada. Tell Spirit Halloween our culture is NOT a costume!!!!

This is a very important cause because culture should not being used as costume and should not be made into a mockery.  This is a human rights violation and is comparable to wearing blackface, or a Hijab, or anything that would mock one's race or culture, which in this year, we should all understand as wrong.

Spirit Halloween is one of the leading stores that sell native costumes throughout Canada. On their website they carry over 50 native inspired costumes most of them depicting women in a derogatory way and also making light of our warriors and Chiefs.  They have pages more of accessories including dream catchers, plastic bone chokers, bow and arrows, and beadwork for both adults and children.  The names they have chosen for their costumes are equally offensive, names such as Huron Honey, Pow Wow Wow, Reservation Royalty, Native Princess, Pocahottie, and sexy dream catcher, which not only make light of who we are as a people, but also makes light of colonial occupation and genocide.

A group of us for the past couple of years have taken action against the store in protest, in the hopes of having the offensive costumes taken off the shelf, but also to educate patrons and passersby not to buy or wear such racist costumes as it is comparable to wearing black face. Spirit Halloween has made light of our complaints and think that it's only a minority of people that have issue with these costumes... this petition is to show them that they are VERY wrong.

Costumes like these are not only racist, but sexist and is a slap in the face of every native woman who statistically are four times more likely, than any other woman, to end up missing, or murdered, while only making up 4.3% of Canada's population. New statistics for men are coming out, showing that their statistics are even higher. Native people face real issues everyday of rape, poverty, murder, violence, discrimination, at a much higher percentage than any other nation in this country.  Putting on a costume for a night, does not give a person's a true native perspective on day-to-day life and makes light of our struggle.

We are strong people, with a strong voice and a beautiful culture.  We are not to be mocked and have our most sacred items, such as headdresses, regalia, ceremonial objects, that take years to make, aquire and are honoured with many ceremonies, only to be cheapened with imitation materials, plastic beads and outright stealing of our designs, that bare geographical significance that has been handed down from generation to generations,  being sold only to be worn as mockery and a novelty.  We are not a novelty, we are not museum relics from long ago with fantasies of cowboys and indians.  Our culture and people are alive and thriving today!!  We are real people fighting this form of racism all across Canada and we are outraged by these ridiculous costumes.  These costumes are racist, sexist and highly offensive, they not only need to be taken off the shelves, and removed from the website, but the production and manufacturing of these costumes should be put to a stop also.  There needs to be a ban on these costumes all across Turtle Island.  We need you to help us tell Spirit Halloween, one of the largest costume stores in Canada, that it is NOT a small number of people that find these costumes offensive and that our culture is NOT for sale!!!

Care2
Ban native costumes from being sold in Canada. Tell Spirit Halloween our culture is NOT a costume!!!!
SHARETWEET