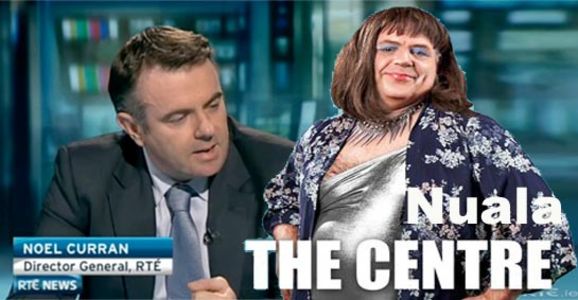 See Youtube for some examples of the vicious comments here

This nasty show is a throwback to the last century when television caricatured gay people as stock comedy stereotypes. Happily gay rights and campaigners are now very much a force to be reckoned with it so Ireland's national broadcaster has found a softer target in Ireland's Transgender population. Transgender people live difficult lives – often at the margins of society, struggle to have any sort of life and are prone to discrimination, verbal abuse and even physical assault almost anywhere at any time. They suffer all the issues associated with gay rights, have very poor access to support of any description and are frequently rejected by family and friends. Physical appearance is something most people have only limited control over so many trans people can’t always manage to pass under society’s radar. For a mainstream comedy to encourage the bullying and ridicule for this tiny minority of defenseless human beings is shameful and an indictment of a society that would tolerate it.

Nuala is the sort of lazy off-the-shelf character of a 'hairy bloke in a dress' from the days when sexist, discrimination and misogynistic “humour” was considered acceptable. Described as a Pre-operative transsexual who's been living as a woman for three years her appearance is somewhere between that of a bloke who's raided his wife's closet for a last minute drag entry to a fancy dress and a stereotypical hooker outfit.  In case all of that combined with the fright wig, hairy chest and dreadful make-up, was too subtle, in the first episode alone other characters mocked Nuala for hairy feet/chest, big hands, a huge Adams apple, a face like it's been "vandalised" and having male genitals.

In other words RTE's script not only says it's acceptable to take issue with a trans person's appearance but here's a catalog of ready-made abuse lines you can use on anyone you come across you think might be TS. The physical appearance of a transsexual person living in their true gender for three years would be typically way more “normal”. But fate and genetics can be cruel and factors like cost of and access to treatment and timing can often make it difficult for a trans person to achieve society’s expectations of appearance.

In other words not every TS person can be the epitome of femininity. But wait, isn't that true for genetically born women too? Thankfully in civilized countries both the law and -more importantly- society are increasingly intolerant of media portrayals encouraging women to be derided and ridiculed over an appearance that doesn’t conform to some idealized image.

Trans people have some of the highest rates of attempted suicide in virtually all countries where statistics have been compiled and Ireland is no exception. Figures in recent Irish surveys reveal 30% of TS people attempt suicide at least once. Particularly relevant to this petition, 40% of participants to the most recent survey said that today's' typical media representation of trans people negatively affected their emotional well-being or mental health. Trans people are also extremely vulnerable to public verbal abuse and indeed physical assault.

Ireland has grown up a lot in recent years on Gay rights and awareness - witness the unruffled acceptance across the country when Civil Partnerships became legal and the Establishments serious underestimation of the level of support for Gay marriage throughout the country. Most people can appreciate how hard it was for gay people being forced to conceal their sexuality and having to in many cases live it part time. But being gay doesn't often affect your prospects of having a place to live, to work or socialize. Because generally it won't even occur to people to consider your ability to function in society could be affected by your gender preference. Being Trans is different and the Trans equivalent of Coming Out is going to fundamentally alter -usually for the worse- your chances of that normal life we should all be entitled to,

This nasty comedy pokes cheap laughs at people quietly trying to achieve some semblance of a life most people take for granted with as much dignity as they can manage. While legislation is catching up, society's attitude to Trans people is broadly similar to that towards gays about 20 years ago, So you don't find many Irish trans people pursuing high-flying careers - they're more typically just getting by the best they can. The last thing they need is RTE - the National Broadcaster- using a monopoly position to tee up trans people as the butt of the type of vicious humour and marginalisation that gays were subjected to for so, so long in Ireland.

The Centre also targets Travellers - another minority like Trans people, which is supposed to be protected by legislation but again lazy stereotyping is apparently OK if it yields some quick laughs.

Significantly RTE initially appeared to have included a token Muslim woman -another minority often subject to discrimination in Irish society. So people who advocate no-holds barred comedy might applaud RTE for the equal opportunity offensiveness to all minorities. However, it turns out this character is not a Muslim but a woman posing as such to hide her plastic surgery gone wrong. There are rather more Muslims than transgender in the world and they’re rather effective at expressing their offence hence Muslims don’t actually figure in the show.

Thank you for taking the time to read this and please sign if you agree it should be pulled immediately, that plans for a sequel should be scrapped and that 21st century Ireland is not emabarassed by RTE exporting this drivel.

If you'd like to complain direct to RTE... complaints@rte.ie

Dear Mr. Curran and the BAI,

We the undersigned insist that you cancel transmission of this discriminatory and transphobic drivel and that you neither export it or commission similar ill-informed programs to incite abuse of transgender and other vulnerable minorities.

You have received numerous complaints amd the program has been roundly condemned by reviewrs in the media so do please take prompt action.