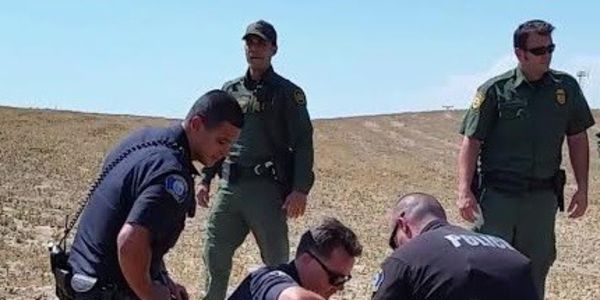 Tell Murrieta to drop all charges against pro-migrant protesters

On July 4th, 2014, 3 days after Murrieta police assisted right-wing, anti-migrant protestors in stopping buses carrying 140 migrants [1], 4 pro-migrant protestors and one filming their arrest were arrested and brutalized in Murrieta while standing up against the anti-migrant presence [2]. These 5 individuals (Jacqueline Sanchez, Salvador Chavez, Pouyan Bokaei, Jessica Rey and Janet Mathieson) are now facing felony lynching charges along with misdemeanor charges for resisting arrest and one charge of misdemeanor battery on an officer.

Wait... Lynching... Isn't that what racists do? The irony is disgusting.

Tell Murrieta to drop all charges against pro-migrant protesters!

While resisting arrest and even battery on an officer are common charges levied on protestors who are themselves assaulted and arrested without just cause, "lynching" may rightfully cause the raising of eyebrows.

Historically speaking, the lynching charge is an archaic law used to prosecute racist white vigilantes who would steal American Indians, Latinos and Africans from police custody and then torture/murder them [3]. The law was actually codified in California in 1933, the same year that two white men were lynched in the traditional sense [4] [5]. However, the modern definition of "Lynching 405a" used against protestors today is "the taking by means of a riot of any person from the lawful custody of any peace officer" (pc 405a). The charge is punishable by up to 4 years in prison. This charge has recently been used as a tool of police oppression against protestors [6], and is now being used to defend the interests of white racist anti-immigration protesters.

Drop the charges against the pro-migrant protesters. End racism.

We are calling on the City of Murrieta (specifically the District Attorney of Riverside County, Paul Zellerbach and the Assistant District Attorney, Sean Lafferty) to drop all charges against Jacqueline Sanchez, Salvador Chavez, Pouyan Bokaei, Jessica Rey and Janet Mathieson. Demonstrations of free speech and the filming of events should not be met with felony charges and protestors should not face up to 4 years in prison for exercising their First Amendment rights. Please stand with us in demanding Justice for these individuals.

For updates on the case and to further support the defense of these individuals please visit People's Defense.

-To Donate and help the arrestees with their legal defense funds here.

-To call upon the District Attorney's office to drop the charges please click here for more information.

For footage and firsthand perspectives, consider consulting the following articles:

I am writing this to ask you to drop all the charges for the cases filed against five people arrested at Fig and Madison on July 4, 2014, during the demonstration at Murrieta, California. These protesters were opposing people who had blocked Federal buses from entering a Federal Government Facility on July 1, and supporting migrant children and woman who were coming to this country. One individual was arrested for documenting the arrests on film. Four of the five arrestees are people of color and first- or second-generation immigrants. Having a felony charge of lynching will jeopardize the lives of these individuals and their families.

We demand, in the interest of justice, that you drop these charges. When anti-migrant protestors working in collusion with the police are able to illegally re-route buses filled with migrants without penalty and pro-immigrant protestors are charged with felony lynching upon attendance to such demonstrations, the morality of the law stands in question. In addition, one person who was simply documenting the event was also arrested and charged identically.