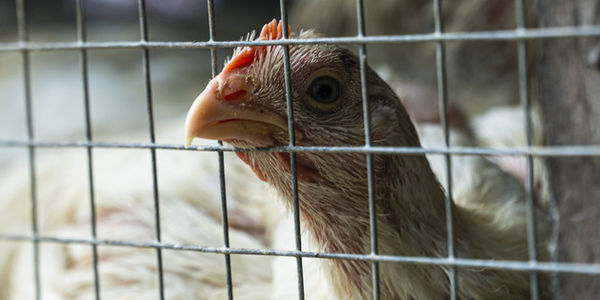 Kenyan Animal Lovers Are Fighting to Improve Animal Welfare in Farms. Let's Stand With Them!

The housing arrangement is called "battery cages," and it's a system of tightly packed wire crates all linked together, with no room between. It's a popular way to "store" egg-laying chickens -- but it's no way to live.

During the pandemic, we've all been confined to our homes, most of us more than we were used to before. Now imagine that your home just got a lot smaller. And smaller. And smaller. Until it's even smaller than your smallest bathroom. Its walls are made of wire. Now you are in a battery cage. And that's the entire life of a battery-caged chicken -- 24/7, for around two years non-stop.

Now Kenyan animal rights activists are demanding an end to battery cages -- and it's time for us to stand with them!

Battery cages are a popular system of poultry farming because it maximizes the number of animals that can be cramped into a space, and therefore "improves efficiency" -- as though these animals were simple robots, not living, breathing creatures. Battery cages around the world, such as the U.S., Mexico, Japan, the UK, and Kenya. But luckily animal lovers all over the world have been rising up against this torture, including in Kenya.

So far, Kenya's government has not imposed clear regulations on its poultry sector, leaving many choices up to farmers' discretion. However, that could all be about to change. State lawmakers are currently working on a new poultry farming bill, and animal lovers are fighting hard to ensure that livestocks' wellbeing is included.

Kenya could be the latest addition to a small but courageous number of countries that have decided to put animal welfare first by banning battery cages. If its government takes this bold stance, it would be an inspiration and trail blazer for many other countries to follow!

Sign the petition to demand the government of Kenya ban battery cage technology for chickens and become a role model for animal welfare protections!
Sign Petition
SHAREShare this petition with friends!TWEETEMAILEMBED
Sign Petition
See more petitions:
You have JavaScript disabled. Without it, our site might not function properly.