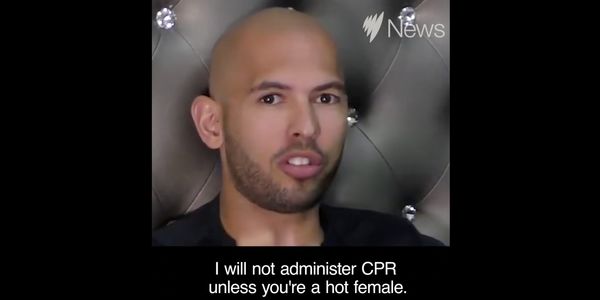 Care2 Update 8/23/2022: Good news! Andrew Tate is offically banned from TikTok and his account was removed from the platform. While this is a huge win, the ban doesn't address the network of copycat accounts that continue to spread his clips, racking up millions of views, and contributing to his viral fame. Keep signing and sharing the petition to demand TikTok take down Tate's copycat accounts!

In just a few months, Andrew Tate has gone from obscurity to internet fame. Tate is a content creator know for his extremely misogynistic and homophobic views. He literally has said women belong in the home, can't drive, and are a man's property. Tate also thinks rape victims must "bear responsibility" for their attacks, and dates women aged 18–19 because he can "make an imprint" on them… which is the literal definition of "grooming."

Unfortunately, Tate has become one of the most famous people on TikTok, with his videos reaching a total of 11.6 billion views. His growing fame is thanks to his fans, who are creating accounts named after him and then flooding social media with Tate's most controversial clips. Between his violent misogyny and copycat accounts, Tate is clearly violating multiple TikTok community guidelines.

Tate's world outside of his current online presence is pretty alarming, too. Tate first gained some recognition for his time on the reality show, Big Brother, when a resurfaced video showed him beating a woman with a belt. He was then kicked off the show. When Tate moved from the U.K. to Romania, he said that "probably 40% of the reason" for his move was due to rape allegations: "I'm not a rapist, but I like the idea of just being able to do what I want. I like being free." Currently, Romanian authorities are investigating Tate for crimes relating to human trafficking, after a woman said she was held in his house against her will.

Tate's fanbase is made up of men and boys as young as 13. Most have been recruited through Tate's online program, Hustler's University. Most viral posts of Tate aren't from Tate himself, but from hundreds of accounts, often using his name and photo, run by his followers, members of Hustler's University. His global network of followers seem "like a cult, asking members to 'be a man' and 'prove themselves' in order to stay. He claims to be turning 'boys into men', but what he's actually doing is turning them into potential abusers."

While TikTok says it is investigating these videos, the platform explicitly bans misogyny and copycat accounts, which many of the Tate videos violate. Even worse? An investigation revealed that TikTok promotes misogynistic content to young people -- particularly boys. "Viewing such material at a young age can shape a child's experiences and attitudes, resulting in further harm to women and girls in and out of school and online," said a policy officer for NSPCC, a UK-based Children's safety organization.