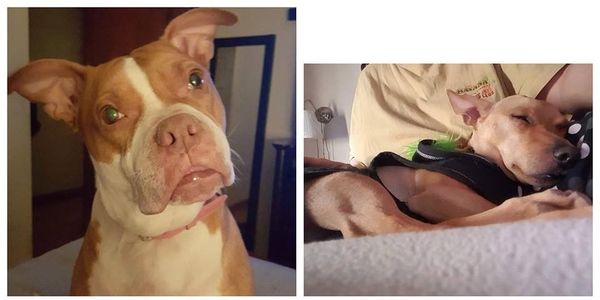 SECOND CHANCE RESCUE NYC: GIVE BACK WILLOW AND PHARAOH

Jo-Lynn Estrada adopted Pharaoh and Willow from Second Chance Rescue NYC and vowed to forever keep them safe, keep them cared for and give them all of her love. In December 2017, Jo's living situation unfortunately and suddenly dissolved and she was left scrambling for somewhere to go. She made the painful, but correct per contract, decision to reach out to Second Chance Rescue for a temporary foster for Willow and Pharaoh until she was back on her feet and could provide for them again. A foster was eventually found and on February 27th Jo's dogs were off to the foster and Pharaoh received a health certificate stating he was able to travel, up to date on vaccinations, and in good condition. Willow had been recently evaluated by the vet. For the next 6 months, Jo was in constant contact with the foster, Julie Pepper Smith, and thought she was kept up to date on their care while she worked vigorously to improve her situation. In August 2018, Jo felt she was fully able to give her dogs everything they needed, as she had established a living situation and had steady income. When she reached out for her dogs back, Julie said no and it took days for Jennifer Brooks, the president of Second Chance Rescue NYC, to respond to Jo's calls, messages, texts and emails requesting a list of items. Despite SCR having no legal right to do so, within hours, Jo had sent verification of her living situation and proof of employment. Jo was anxious to be reunited with her dogs! She had worked so hard to be with them again. She anxiously awaited Second Chance Rescue's correspondence but within an hour, Jo found she had been blocked from the Second Chance Rescue NYC adopter/foster support group. SCR then posted baseless allegations in that group, removing anyone who defended Jo. Jo didn't hear anything again, even after many emails requesting she be united with her dogs, until Aug 27th, 2018 when Jennifer Brooks finally responded in an email that Jo will NOT be receiving her dogs back. Jennifer Brooks claims that the dogs were received by the foster, Julie Pepper Smith, with a myriad of health issues, and that Jo did not respond to requests from the foster to pay any medical bills and was not in contact with her for Willow and Pharaoh. Jo has asked for evidence of their attempted contact but has not been answered. The health issues that Jennifer Brooks claims the dogs have are either a product of the way the dog is built (Willow has an underbite and will therefore be more likely to suffer from gum disease) or were already being taken care of (Willow's injured ligament and Pharaoh's chronic ear infections). These are all baseless claims made by Second Chance Rescue NYC and the foster, Julie Pepper Smith. Jo was in CONSTANT contact with Julie, and even skyped with her. Second Chance Rescue can not produce any documentation stating that Jo ignored attempts for medical care coverage. When Jo requested this documentation - proof of requests for vetting, payment, etc she was told to speak to their attorney. Second Chance Rescue NYC: We want Jo's dogs back! Jo can back up her claims, can you? Your accusations are cowardly and are hurting Willow and Pharaoh, as they wait to be reunited with their mother, who worked so hard to be with them again! STAND WITH US AND TELL SECOND CHANCE RESCUE AND JULIE PEPPER SMITH THAT WE WON'T REST UNTIL WE HAVE THESE DOGS SAFELY BACK WITH US!