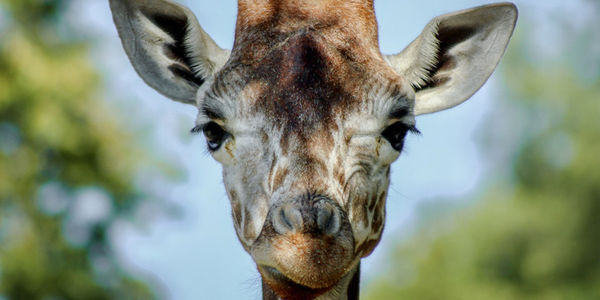 A severe drought in Kenya is attacking humans and animals alike, depriving them of water to the point of death. A full half of the country is under assault by the lack of water, parching worse and worse as the days go by.

Just recently, staff at the Sabuli Wildlife Conservancy discovered six of their protected giraffes -- dead -- flat against the Earth after they dehydrated and starved. The drought has also depleted many of the plants that animals like giraffes feast on, meaning both food and water sources have literally dried up. Desperate for water and down to just skin and bones, the six animals apparently struggled to reach a reservoir. But their weak legs got caught in mud and they couldn't muster the strength to escape. So all six creatures died right there, stuck, yearning for water that they would never reach.

Sign the petition to urge international cooperation to help alleviate calamities from the drought!

Estimates suggest that Sabuli, a region in the northeast of Kenya, has received only 30% -- or less -- of its usual rainfall during this time of the year. These six starved giraffes are a warning sign: more giraffes are about to die if something doesn't change. Experts say approximately 4,000 nearby giraffes are also at risk of these slow, painful deaths as the drought continues to spread across neighboring areas.

This drought is clearly linked to climate change, with research showing that droughts are occurring more frequently and lasting longer than in the past. Last year, 2020, was the third-hottest year on the African continent to have ever been recorded. And so far, no rain is yet in sight.

The government is trying to help, attempting to provide water to wildlife in affected regions. But the problem is reaching epic proportions. Not only are 4,000 giraffes and countless other wildlife facing down their demise, but more than 2 million Kenyans are also at risk of drought-induced starvation. The National Drought Management Authority for Kenya has also stated that significant portions of the populace are in "urgent need" of humanitarian food assistance.

With the COVID-19 pandemic continuing to rage on, we all need to cooperate now more than ever. The Kenyan authorities are working hard around the clock to provide for both their people and their wildlife -- but we as an international community can do more to help.

Sign the petition to urge the United Nations to commit to providing humanitarian relief and wildlife assistance during the drought ravaging Kenya!
Sign Petition
SHAREShare With FriendsTWEETEMAILEMBED
Sign Petition
See more petitions:
You have JavaScript disabled. Without it, our site might not function properly.