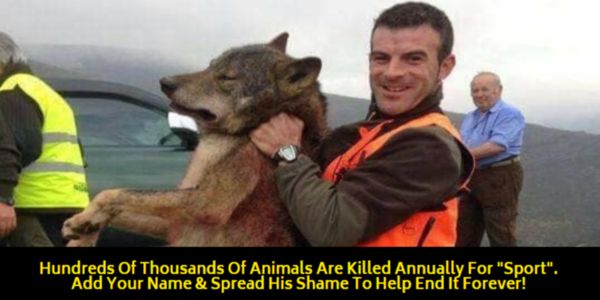 Ban Trophy Hunting Once And For All!

Hundreds of thousands of wild animals are killed by trophy hunters each year in the U.S. and around the world!

Add your name if you want to ban trophy hunting in the USA, AND ban the import of animal trophies from abroad!

"Each year, hundreds of thousands of wild animals in the U.S. and around the world are killed by trophy hunters.

"The hunters' primary motivation is not to get food, but simply to obtain animal parts (heads, hides or claws and even the whole animal) for display and for bragging rights.

"Trophy hunters use cruel and unsporting methods like baiting and hounding to target native carnivore species like bears, mountain lions and wolves, shoot animals in captive hunts (in which hunters pursue animals who can't escape) and they participate in gruesome wildlife killing contests that target bobcats, coyotes, foxes and other species," according to the Humane Society.

Let that number sink in.

All so that "sportsmen" can entertain themselves by taking the lives of wild creatures.

How can murder ever be fun?

When a human takes the life of an animal, they also take a mother, a father, a child, or a beloved mate.

A family is left without a loved one, every single time. Multiply that suffering by thousands, each and every year...

In return, some heartless hunter gets to feel macho by posing for a picture to show his buddies.

It's time for this wicked "sport" to come to end. Permanently.

Otherwise, how can the United States consider itself a civilized nation, if not ALL life is valued?

Senator Bernie Sanders has been a long-term advocate for animal rights, and has co-sponsored numerous pieces of legislation to protect endangered species, as well as to combat animal cruelty.

That's why we're asking him to lead a movement in Congress that would ban trophy hunting across the United States once and for all, AND ban the import of all animal trophies into the USA from abroad.

Don't you want to stop this cruel, heartless practice, before any more animals needlessly suffer?

Then add your name to ask Senator Sanders to draft legislation that would ban trophy hunting in the United States, AND ban the import of trophies from abroad, forever!

Care2
Ban Trophy Hunting Once And For All!
SHARETWEET