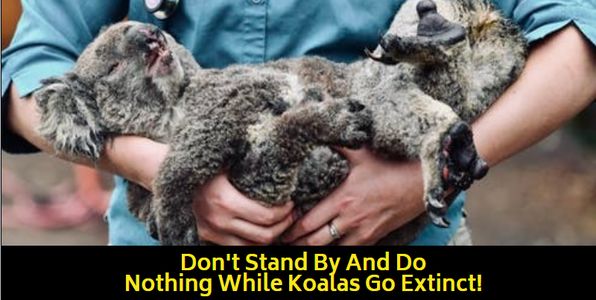 Help These Burned And Starving Koalas, Before It's Too Late!

Add your name if you want to rescue them, while we still can!

"The plight of koalas during the recent bushfire crisis made headlines, but the emergency for our wildlife is not over.

"Koalas that survived the flames are now dying from starvation, dehydration, smoke inhalation and other hazards," reported The Conversation.

"Over the past three weeks in one wildlife conservation property alone, a rescue team found koalas recently crushed under fire-damaged trees, and koalas with burnt paws after descending to the smoldering ground after the inferno had passed, hoping to change trees and find food, including an orphaned, emaciated koala with all four paws burnt.

"Koalas are also at risk of dying from infections associated with these injuries, or from the ongoing effects of smoke inhalation.

"Even uninjured koalas are struggling to find food in their burnt habitat and may soon starve," they added.

"The fires in Australia's southeast destroyed huge swathes of koala habitat in areas where they were already vulnerable - dehydrated and malnourished due to prolonged drought, climate change and land-clearing.

"Adding to the pressures, an estimated 5,000 koalas died as a result of the recent fires in New South Wales alone – potentially two out of every three.

"After bushfires, a koala's territory is often no longer able to sustain them due to lack of food – which for koalas also provides water – or lack of shelter. Without canopy cover, koalas simply overheat," reported the same source.

These poor koalas are suffering so much...

Have a look at this:

"In the past three weeks, we've made particularly tragic discoveries.

"In the Snowy Mountains, two koalas that survived the inferno had been crushed and killed under fire-damaged trees.

"We sighted one of these koalas three days in a row. The first two days, he was in trees he could not be safely rescued from. The third day, he was fatally crushed.

"As recently as last week we found koalas suffering burns, predominantly on their paws. These animals would have continued to suffer severe pain trying to climb trees had we not rescued them," said The Conversation.

According to the IUCN, koalas are still listed as vulnerable - but that isn't the most recent assessment.

The simple truth is that we don't really know how bad things are for koalas as a species right now.

And that's why it's so important to save every single koala we can.

Only the Australian government has enough power and resources to provide the high-level organization and on-the-ground support that is needed to get the job done.

1. Finding and rescuing koalas on the ground

2. Ensuring they have all the medical attention they need

3. And feeding and sheltering them until their natural habitat has recovered enough from the fires that they can return to the forests where they belong.

Without this vital action, koalas could soon become extinct.

Are you going to stand by while that happens?

Add your name to demand that the Australian government do the right thing, and save as many koalas as they can, before it's too late!

Care2
Help These Burned And Starving Koalas, Before It's Too Late!
SHARETWEET