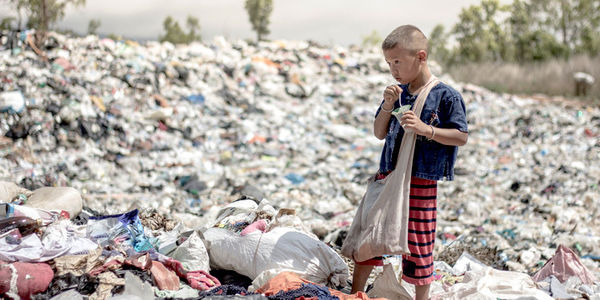 Each year, the United States produces tens of millions of tons of plastic waste. Waste that is not recyclable (since most plastics are actually impossible to recycle). Waste that ends up breaking down, for eternity, in landfills.

But that plastic doesn't stay in the U.S. No, no. Most of the plastic waste that is produced in the United States is instead shipped overseas — to slowly rot in someone else's backyard.

And the amount we're producing and exporting has been increasing year over year. Data from January 2021 shows the U.S. exported 48 million tons of "scrap plastic" — more than the 45 million tons logged in January 2020 — with much of this ending up in poorer countries. One of the major recent destinations has been Malaysia, which has become flooded with Western take-out bags, plastic straws, and more.

Sign the petition to demand the U.S. pass regulations to stop plastic waste from being dumped overseas!

The U.S. isn't the only rich, industrialized country that has engaged in this kind of pollution warfare in the past. But it is one of the few countries that continues to pretend this is all "a-okay."

In 2019, upwards of 180 countries around the world — including the United Kingdom, India, China, Australia, and also the European Union — came together to sharply curtail this type of "trade" in plastic waste, particularly limiting rich countries from simply dumping their plastic trash on the lands of poorer countries. This was done by adding a new series of Plastic Waste Amendments to the Basel Convention on hazardous waste. The United States did not participate in the decision. And it remains one of only two countries to not have ratified this Basel amendment.

However, in January 2021, the new agreement went into effect — and its adherents include many of the countries where the U.S. has been sending it trash for years, such as China, Malaysia, Thailand, Vietnam, and India. But that hasn't stopped the U.S. from still shipping its excess waste to these countries' borders, and leaving it up to their governments to decide how to handle it. This abdication of moral responsibility and "passing of the buck" is absolutely despicable.

Luckily, now that Joe Biden is President of the United States and Democrats control both chambers of Congress, we have a chance to do things differently in the future. Developing countries do not deserve to be saddled with our overflowing pollution.

Sign the petition to demand that Joe Biden and the U.S. Congress work together to ratify the Basel Convention and its Plastic Waste Amendments now!
Sign Petition
SHAREShare this petition with friends!TWEETEMAILEMBED
Sign Petition
See more petitions:
You have JavaScript disabled. Without it, our site might not function properly.