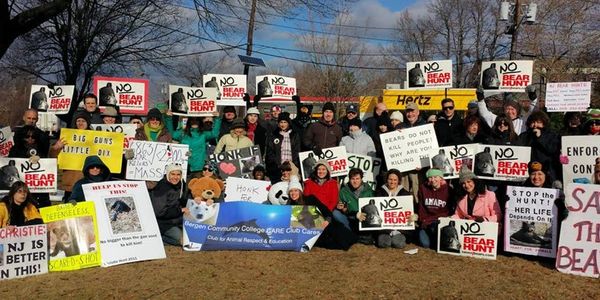 Please sign this petition and also call Governor Christie's office at 609-292-6000 to express your outrage over the bear hunt. Ask him to STOP pandering to the violent minority calling for a bear hunt; they represent less than 0.07% of New Jersey’s population.

Education reduces unwarranted fears and allows the public to enjoy these beautiful animals and their place in our state. Modifying your behavior will modify the bear’s behavior. When you know what to do, how to properly act and react, the bear will learn from you.

Case studies proved that when food was unavailable, bears were capable of living in close proximity to humans without conflict. (Wildlife Conservation Society, 2008) The vast majority of bear incidents in New Jersey involve unsecured trash bins and dumpsters as well as bird feeders. New Jersey Division of Fish and Wildlife’s enforcement of an existing, loophole-ridden state feeding ban is poor to non-existent. It’s time New Jersey passes, and enforces, a meaningful ban.

Hunting, killing and destroying our bears is not the answer, co-existing and learning about living together in peace is the answer.