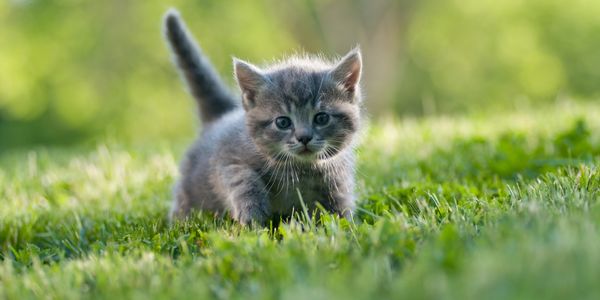 One of any responsible citizen's pet peeves is littering. It's so annoying to see someone empty their plastic-lined pockets onto the ground, flick a cigarette but into the gutter or toss a styrofoam coffee cups out of their car.

While these acts are bad, however, they don't compare to what one woman saw someone throw out of their car recently in Pontypool, Wales, UK. She was driving on the road when she saw a gray car in front of her toss something out of the window. As she came closer, the "thing" came into view the fluffy ball of fur began to move. It was a kitten.

Shocked she stopped the car in the middle of the roadway blocking traffic, got out and picked up the kitten - a kitten that she had nearly run over. She cupped the kitten in her hands, took it to her car and rushed the grey cat to the vets.

Miraculously, the little bundle hadn't been injured. The beautiful male kitten, with its stunning blue eyes, is now likely to be adopted by its rescuer but as for the person who did this to him is still on the loose. They must be found and prosecuted.

A dash came grabbed footage of the horrible event and a grey car that is suspected of being the culprit.

With all this evidence, police in Pontypool should have no reason not to pursue the evidence and find the person who did this.

Please sign the petition and tell the police you want them to do everything you can to find the guilty party.
Sign Petition
SHAREShare this petition with friends!TWEETEMAILEMBED
Sign Petition
See more petitions:
You have JavaScript disabled. Without it, our site might not function properly.