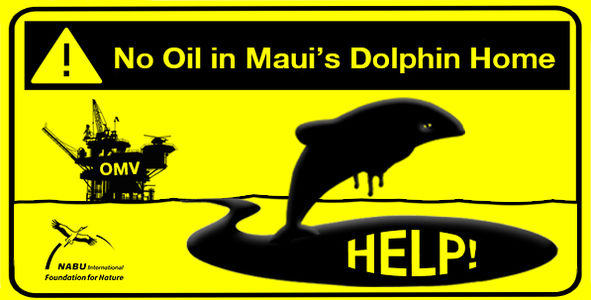 No oil exploration or drilling near last 50 Maui's dolphins

New Zealand’s Maui’s dolphins are the smallest and rarest marine dolphins on earth. Fishing nets have decimated Maui’s dolphins from almost 2,000 to just 50. Now big oil companies have begun to move in on the dolphins..

Austrian oil giant OMV has caused three oil spills near the dolphins’ home – most recently in February 2015. OMV wants to drill seven more wells in the area, further increasing the risk to the last 50 Maui’s. Another spill could wipe out the dolphins for good.

To make things worse, OMV is conducting seismic surveys to find more oil and gas under the sea. Seismic tests use deafening air gun blasts that penetrate thousands of meters of water and continue deep into the ocean floor before returning to the water surface, where they are picked up by hydrophones. They boom through the water every 10 to 12 seconds around the clock, day after day, for weeks or even months.

Seismic surveyscan cause dolphins to avoid important habitat, drive them into fishing nets, interfere with feeding, reproduction, resting, communication, hearing sounds that are vital to their survival, and increase the risk of calves being separated from their mothers. They can also reduce the dolphins’ ability to fight diseases and increase mortality.

New Zealand’s Code of Conduct for seismic surveys, which OMV follows, consists largely of "feel-good" measures that are barely better than doing nothing.

This could be the final blow for Maui’s dolphins.

We ask the New Zealand Prime Minister to withdraw OMV’s and other oil companies’ permission to conduct in seismic surveys, drilling and oil production in or near Maui’s dolphin habitat.