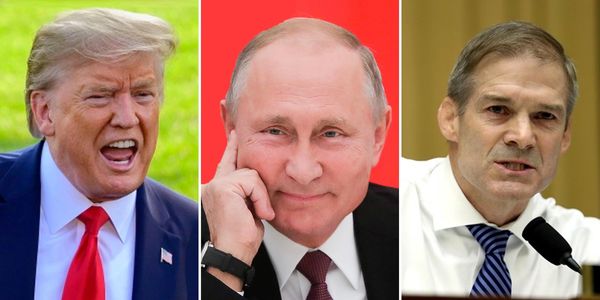 We've come to expect hyperbolic falsehoods and moral turpitude from President Trump when it comes to his, uh, let's call it governing style, so it's no surprise how he's handling his Ukraine bribery scandal now engulfing him.

The president has clearly adopted a zero-sum endgame approach, scorching any semblance of decorum with baseless, broadside character attacks, baseless conspiratorial musings, and general obfuscation of established facts. What's truly shocking and potentially more damaging to the republic is the weak-kneed fealty of the GOP establishment in this dangerous, destabilizing game.

True, there are outliers in the Republican midst like Sen. Mitt Romney who aren't willing to feebly fall in line, but the overwhelming majority of elected GOP officials are incredulously toeing the poorly drawn Trump line on Ukraine, repeating and retweeting widely discredited talking points and conspiracy theories so outlandish that Vladimir Putin expressed thanks to Republicans for spreading his propaganda.

The US intelligence community confirms that the absurd argument that Ukraine is to blame for 2016 election meddling originated in Russia. And yet, the GOP persists, harming American interests and emboldening the very adversary that attacked our democracy in 2016 and plans to do the same in 2020.

The ongoing impeachment inquiry, which has been handled with sterling precision and focus thus far, is the constitutionally mandated safeguard for just such a moment. We must insist that our elected officials stop playing politics with a very real constitutional crisis. We have a rogue presidency hopelessly careening off the rails; now is the time for Congress to rise to the occasion.