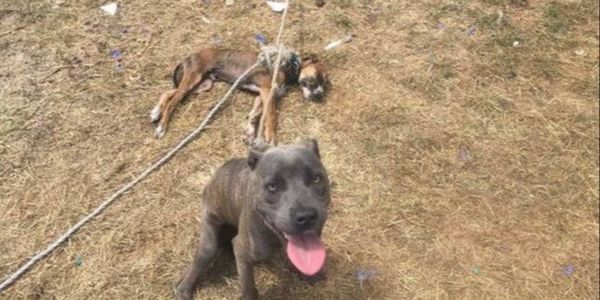 CHANGING THE LAW TO STOP DOG CHAINING TETHERING IN AUSTRALIA

Dog chaining or tethering has now been banned in many countries simply because it is impossible to monitor just how long a dog will remain tied up. Evidence is available of dogs that continue to suffer right now in Australia – many who are destined for a life of misery – and suffering at the end of a rope/chain.

THE Neglect OF A DOG starts somewhere. And it's long before ribs are showing. Long before collars are embedded into skin. Long before the sun scorches an animal's skin. Neglect most often starts with the simple act of tethering an animal outside.

Animal Behaviorists Agree: Chaining Makes Dogs Dangerous
British animal behaviorist Dr. Roger Mugford states, "Dogs, just like human beings who get locked up for no reason, will get mean and bitter." According to animal behaviorist Shelby Marlo, "[D]ogs who are forced to live their lives at the end of a chain suffer from severe psychological, emotional, and behavioral effects."

A 1994 study partly authored by two Centers for Disease Control and Prevention (CDC) physicians found that "BITING dogs were significantly more likely … to be chained …." According to the study, chained dogs were 2.8 times more likely to attack than dogs who were not tethered.

The American Veterinary Association (AVMA) advises dog guardians, "Never tether or chain your dog, because this can contribute to aggressive behavior."

SOME OF THE PHYSICAL RESULTS OF DOG CHAINING include:

● Their necks can become sore and raw

● Heat and cold stress effect internal organs and with recent deaths the dogs have boiled alive. The climate crisis mean that more dogs will die this summer on the end of a rope.

● Their collars can painfully grow into their skin

● They are vulnerable to insect bites and parasites

● They are at an elevated risk of entanglement, strangulation

● During periods of heat which is now commonplace, tethered dogs may not receive adequate water or protection from the sun (see articles above under CHAINING DOGS IS CRUELTY TO ANIMALS)

Physiological Ailments - Dogs are naturally social animals that need interaction with humans and other animals. The bcome more

THE CLIMATE CRISIS
In Australia there is a backlog of dogs that have died on the end of a rope/tether/chain who have endured painfully slow deaths due to overheating in back yards tied without access to proper shade and shelter and this is increasing every year. The CODE RED CLIMATE CRISIS means more dogs will die this summer.

"AN RSPCA inspector for the Wide Bay says dog owners should give up their pets rather than tether them all day, after a third dog dies while being tied up in the region.RSPCA Inspector Penny Flaherty was called to another heat-related dog death,

The inspector said the three similar deaths in the region were a stern warning of the dangers surrounding tethering or chaining up pets.She said it would be more responsible to re-home a pet, rather than tie it up all day. "It's just so dangerous," she said.

"Tethering shouldn't be a lifetime option for the animal, it's not a quality life, if you can't give it that, then re-home it, that's being responsible too." Source Fraser Coast Chronicle Feb 2017

It's the tethering of dogs that has given RSPCA Qld North Brisbane Inspector Sharni Statham the most grief in the last few days."I've been attending about six calls a day in regard to dogs being tethered and not being able to reach shade or water," she said

THESE SHOCKING DEATHS SHOULD NEVER HAPPEN AND VETS , Professional Pet Guilds AND INSURANCE COMPANIES have heat and humidity charts which CONFIRM THIS

A rise in temperatures and extreme weather events means that comprehensive temperature and humidity charts that have factored in Solar Radiation for dogs be ISSUED TO THE COMMUNITY for education, that the law be changed and enforced immediately. To avert further deaths of companion animals and limit the dangers, attacks and deaths that face communities from aggressive dogs that have been tethered

WHAT CAN YOU DO TO HELP

FOLLOW FACEBOOK PAGE - BAN DOG CHAINING - WHERE A PETITION WILL BE UP WITHIN A WEEK with other supporting documents, including a list of articles of dogs that have died while tethered in the sun, which you can present to your local MPS.

JOIN THE THE ANIMAL JUSTICE PARTY and ask them to make this a high priority campaign to change the law. Information has already been given to them.

The practice of stationery confinement by tethering for dogs is now considered a cruel practice and we have evidence from the many countries that the ban has been successful both for the community, the dogs and in saving tax payers money from the countless call outs for dogs suffering on the end of a rope. These testimonials will also be available as part of the Ban dog Chaining package along with BEST PRACTICE LAWS.

Animal Behaviorists Agree: Chaining Makes Dogs Dangerous British animal behaviorist Dr. Roger Mugford states, "Dogs, just like human beings who get locked up for no reason, will get mean and bitter." According to animal behaviorist Shelby Marlo, "[D]ogs who are forced to live their lives at the end of a chain suffer from severe psychological, emotional, and behavioral effects."

"We [passed] this ordinance for two main reasons: (1) the safety of our citizens and (2) for the humane treatment of the animals. Our records indicated that 51 percent of our dog bites were from dogs [who] were confined on chains or had been chained and had broken loose. … I observed that most of our dogs [kept] chained were receiving inhumane treatment." —Elaine Modlin, animal control officer, Laurinburg, North Carolina

"Children are the most common victims of serious dog bites." —The American Veterinary Medical Association

Chaining ruins dogs' nature as social pack animals. According to syndicated pet columnist and veterinarian Dr. Michael Fox, "Dogs are pack animals and need frequent contact with their own kind or with human beings." The Washington (D.C.) Humane Society states, "Chaining, by definition, keeps a dog in solitary confinement, continually thwarting [the animal's] pack instinct to be with other animals or with [his or her] human 'pack.'" As undersocialized animals, tethered dogs develop behavioral problems, which often result in attacks. As animal behaviorist Dr. Temple Grandin writes in her latest book, Animals in Translation, "An animal who hasn't been properly socialized to his peers isn't dangerous only to other animals. He can be dangerous to humans, too."

Chaining heightens dogs' natural territoriality. Tethers limit dogs' space and make the boundaries of those few square feet of territory much more distinguished. Regarding chained dogs, American College of Veterinary Behaviorists President Elizabeth Shull states, "In addition to frustration, the constant physical restraint promotes excessive territoriality, which may be manifested as aggression. These attacks are completely unnecessary as they are easily preventable by using a secure fence for containment."

Dogs are 'fight or flight' animals. When confronted with a threat, a dog will either flee from the danger or confront it. Tethered dogs have no ability to flee and escape from danger, so they must attack. Karen Delise explains: "The natural fight or flight response afforded to most animals in most stressful situations is denied to a chained animal. The dog is cognizant of the fact that he can only retreat the length of the chain and will often opt to 'stand his ground.' Removing the option of flight for any animal will always increase the chance of a physical encounter (or fight response) to a perceived threat."


"In addition to frustration, the constant physical restraint promotes excessive territoriality, which may be manifested as aggression. These attacks are completely unnecessary as they are easily preventable by using a secure fence for containment."—Elizabeth Shull, president, American College of Veterinary Behaviorists


Chaining Dogs Is Cruelty to Animals
While the fatal consequences to humans of chaining dogs are what most often capture public attention and officials' response, continuous chaining is also detrimental to the physical well-being of any dog. Many chained dogs are deprived of adequate food and water, shelter, and veterinary care, and their social needs are ignored. They frequently die of heatstroke throughout the summer and succumb to exposure during the winter. Internal and external parasites feed on these animals year round. In the summer, flea and tick infestations and suffering brought on by flystrike are especially severe for chained dogs, who have no escape from them.

Chained dogs often choke to death or are attacked. Chained dogs hang or choke to death after they become entangled or try to leap over fences or other items. Collars put on dogs as puppies become painfully embedded in the animals' skin as they grow older and the collars are not enlarged. Many dogs who are left to fend for themselves at the end of a chain fall victim to attacks by other animals or cruel people. Chained dogs are tortured, poisoned, shot, stabbed, set on fire, stolen to be used as "bait" for fighting dogs, and abused in countless other ways. These animals' fates have prompted many cities and counties to pass anti-tethering legislation. For example, Fairhope, Alabama, banned chaining after the city's animal control officer rescued a chained dog who was so starved that his ribs were clearly visible. After the remains of a Burleigh, New Jersey, woman's chained dog were found in her back yard in January 2004, at least six cities in Cape May County adopted anti-tethering ordinances. Tucson, Arizona, restricted tethering after "animals [who] had been tied out wound up choking themselves" by "jumping over items," according to the City Attorney's Office.

"The ordinance was originally passed because putting an animal on a [tether] was deemed cruel for a variety of reasons. … We had seen a number of instances where animals … wound up choking themselves when they tried to escape by jumping over items in the yard, such as cars or motorcycles." —Pat Mehrhoff, senior assistant prosecuting attorney, Tucson, Arizona

PROPER HOUSING IN HEATWAVES which are NOW COMMONPLACE
It is summer in Queensland Australia heat can and will and has killed dogs tethered on chains. It is abuse to make an animal suffer in sun. I live in the Scenic Rim and have noticed so many dogs tied out in the sun with nothing but a hot box for shade who are tethered/chained to this hot box with no relief from the blazing sun as the dog house is too hot. Some dogs dont even have a dog house.
This is an immediate problem, and our current laws do not allow animal control to help them. The current law does not protect animals and is failing law officers who are trying to protect these animals.

By signing this petition you are making it possible for our law enforcers to bring relief to these animals. By signing this petition you are agreeing that dog tethering/chaining should be banned and that any outdoor dog house be made of suitable material and be protected from direct sunlight such as a trees or other structure that protects dogs from suffering in heat and other weather extremes.