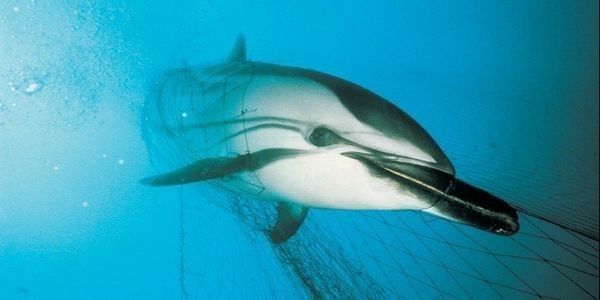 This Country Refuses to Do Anything About The Hundreds of Marine Animals Dying Off Its Shores.

When it comes to being a whale, dolphin, sea turtle or other marine life off the Australian coast, the struggle isn't just real, it could mean life or death. That's because the country continues to use shark nets — a dubious contraption set up near beaches to keep sharks from reaching beachgoers. They are supposed to keep swimmers safe, but more than anything they kill marine life.

The cruel devices ensnare and often kill thousands of protected species. Last year around this time we told you about the case of a humpback whale that had gotten completely entangled in a shark net. According to the Huffington Post, "the whale was thrashing and rolling repeatedly to free itself from the net, which caused the lines to tighten around its tail and pectoral fins." Luckily, it was rescued. A year later, another whale, one of several over the past two years, also had to be saved.

The whale was the third this year to get entangled in a shark net in Queensland and if it hadn't been for rescuers, who risked their lives to free the marine mammal, it likely would have tired and drowned.

We usually hear about the whales but other marine animals also get tangled, and oftentimes no one comes to their rescue, instead, they suffer in silence and die an agonizing death. In fact, in 2017, shark nets in the state of New South Wales (NSW) alone ensnared more than 300 non-target animals, killing half of them.

These nets aren't even proven to protect the public from attacks. In NSW, for example, 65% of shark bites occur at netted beaches.

The Australian government can come up with a plan that protects marine life and humans at the same time. Please sign the petition and ask them to find a less harmful and more effective way to protect beachgoers. It's time to remove the shark nets.
Sign Petition
SHAREShare this petition with friends!TWEETEMAILEMBED
Sign Petition
See more petitions:
You have JavaScript disabled. Without it, our site might not function properly.

Care2
This Country Refuses to Do Anything About The Hundreds of Marine Animals Dying Off Its Shores.
SHARETWEET