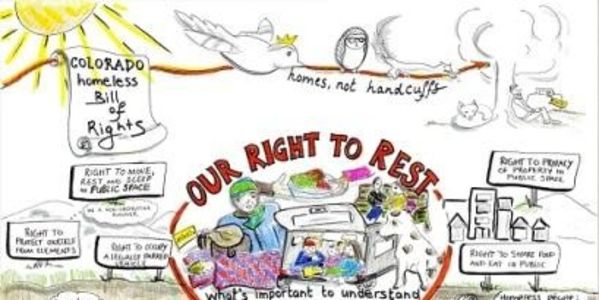 Denver City Council: Repeal the Urban Camping Ban and stop the sweeps of the homeless

In May of 2012, the Denver City Council passed the Urban Camping Ban, which bans people from covering themselves with anything and lying down anywhere in Denver.   Studies by the University of Denver found that the ban has made homeless people less safe, so that many have abandoned sleeping in groups because it makes them more visible to police.

For the first four years of the ban, people living on the streets were often awakened by police several times a night and told to "move on" despite there being nowhere to move to and far too few clean and safe shelter options to begin to meet the need. Refusal to move led to arrest. The studies have also shown the staggering amount of public funds wasted on enforcement of the ban rather than being spent on new housing or even allowing tiny homes or an encampment to exist.

There was renewed hope that change would occur when new City Council members promised to spend $1.5 million per month on desperately needed housing.  But all we got were funds intended to help the homeless used for enforcement instead, plans for more housing with very little for the homeless, a chance for the mayor to brag on the city's growth, and closed shelters.

For over four years, Occupy Denver and Denver Homeless Out Loud have been fighting the ban. We presented a Care2 petition with over 13,500 signatures to the city council in October 2015 the day after a raid on a tiny homes village in construction. We have continued to speak at city council meetings, email them and protest the ban during our weekly community meals for the homeless when we also provide clothing and survival gear.  We urge people to boycott businesses that support the ban.

All possible legal avenues are being pursued.  A district court class action lawsuit filed last winter on behalf of homeless people whose possessions were stolen by police will test the legality of the "sweeps."  Three DHOL activists who were recently arrested for violating the ban and whose belongings were stolen now face charges that could carry a year in jail. Their attorney is also pursuing the district court class action against the city. His argument will be based on violation of the peoples' constitutional rights to safety in their persons and possessions.

DHOL has presented the Right to Rest bill (a homeless bill of rights) to the state legislature for the third year in a row. They are hopeful that increased public attention and threatened national sanctions against the city will pressure the city council to repeal the ban. There have been many articles and news reports in the local media and large meetings to discuss ideas for solutions.  Little to nothing has resulted.

For the past year, the city has been conducting regular raids, called "sweeps" of the homeless. The story was that groups of people living on the sidewalks presented a "public health hazard" that needed to be swept away.  Thus began a reign of terror for the homeless who are still being robbed of their possessions, left without cover in sub-freezing temperatures and tracked down and arrested 500% more often than the previous year.

The police have also arrested activists during protests (Occupy had 10 arrests and two encampment sweeps last winter), violated a district court injunction by abridging our free speech rights, and continued to confiscate belongings. Over 2 million people viewed a YouTube video of police confiscating blankets and tents on a very cold night, which embarrassed the mayor enough to tell the cops to stop doing it, but it just continues.

It is time to demand that the Denver City Council listen to the people and recognize that homelessness is not a crime. These human rights abuses must stop.  Please sign this petition to demand that the Council repeal this inhumane law, stop the "sweeps" and restore homeless people's right to live safely and with dignity.

If you care about the homeless and reject the belief that homelessness is a crime, please sign this petition to tell the Denver City Council to repeal its Urban Camping Ban and stop "sweeping" the homeless from the streets.  Denver's massive gentrification of the downtown area has resulted in very high rents and a total lack of affordable housing for the homeless as well as the desire to render the homeless invisible to tourists and visitors.

Help us pressure the City Council to recognize that criminalizing homelessness, arresting and incarcerating our most vulnerable citizens and stealing their possessions are morally wrong and unconstitutional.  We have lost 181 homeless people this past year and more are suffering and dying daily in cold winter conditions without supports.

Our long struggle of over four years has only resulted in more reprisals against homeless people and their advocates despite law suits, proposed legislation, meetings, city council speeches, regular protests and homeless meals.  Help us put an end to this inumane treatment of the homeless by demanding that the city council repeal the ban and stop the "sweeps".