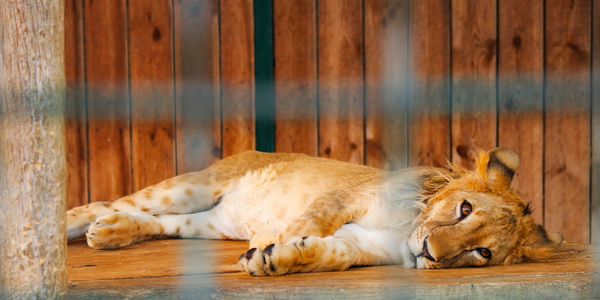 This rescued lion was just sent back to his abusive captor who pulled out his teeth and claws!

Teeth ripped out. Claws horrifically removed. The neverending cacophony of loud, unfamiliar city sounds. This was the life of a captive lion being held prisoner in the dense city of Phnom Penh, Cambodia by an owner that wanted him as a pet.

The 150-pound wild animal was saved, though, thanks to a viral video that showed the lion pacing in a small backyard. His captive city life was over, and he was set to begin anew at the Phnom Tamao Wildlife Rescue Center (PTWRC) where he would have an appropriate habitat and proper care. Until Cambodian Prime Minister Hun Sen stepped in, and sent the lion right back to its life of captivity.

Sign the petition and demand that Cambodian Minister of Agriculture Veng Sakhon insist that this lion be once again rescued, for good!

A life of captivity in a city is no place for a big cat. They are wild animals, requiring miles and miles of habitat in which to roam, hunt, and form social groups called "prides." This lion lives alone in a small city residence.

His owner insisted on going against the poor animal's nature in order to keep it as his own personal plaything, going so far as to tear the lion's canine teeth from its mouth and declawing it. Not only are these excruciating, traumatizing things to do to an animal -- they also greatly "reduce the quality of life for wild cats."

Painfully modifying the body of a wild animal in order to make it more to your liking is deplorable. We have domesticated animals that are suitable to be pets already -- they are called cats.

This life of misery ended for the young lion, but then Cambodia's Prime Minister got involved for some reason, claiming that this was a "special case" and that the lion should be returned to its captor as long as a proper cage was built. So not only is this lion going back to these terrible conditions, but it is about to have an even more restricted habitat.

Cambodian Minister of Agriculture Veng Sakhon must stand up for the animals he is tasked with protecting, not the people who would use and abuse them.

Sign the petition and demand that this poor lion be rescued permanently and sent to a sanctuary where it can live out the rest of its life in peace!

Care2
This rescued lion was just sent back to his abusive captor who pulled out his teeth and claws!
SHARETWEET