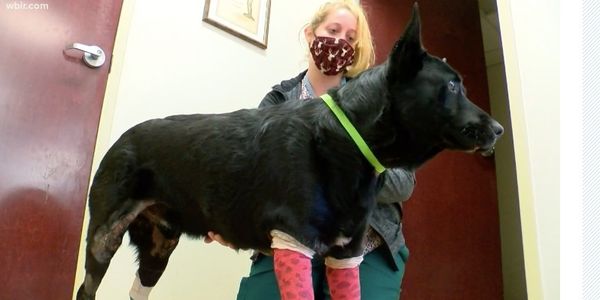 In the dead of night, they drove the poor dog to a church parking lot. It was probably bitterly cold that evening in Tennessee at the end of January as they loaded the sweet boy out onto the pavement -- but that would quickly become the least of the dog's worries.

His cruel handlers proceeded to tie him to the back of the vehicle and speed around the parking lot, dragging the helpless dog behind. His legs and belly scraped and tore against the concrete as he undoubtedly tried to stop and free himself. But he was no match for the tons of metal and the heartless people inside. They were certainly trying to kill him.

But this dog miraculously lived, and those who rescued him have named him Church after the place where he almost died but was, in fact, rescued.

Sign the petition imploring the Sullivan County Sheriff's Department to do everything in their power to find the cruel individuals who tortured and tried to kill Church!

Church, a beautiful German Shepherd mix, is reportedly recovering slowly since his injuries were so severe. But despite all he has been through, Church is in good spirits, wagging his tail and taking a few shakey steps at a time to beg for pets and love. His caretakers say that once his long road to recovery is through, he will be adopted to a new forever home where he will get the good life he deserves. It is a true miracle that Church still trusts people at all.

Although there is clear surveillance footage of the horrific attack on Church, no one has yet been identified and charged with animal cruelty. While there is a $2,500 reward being offered in the search for the two individuals on the surveillance video, Sullivan County authorities must exhaust every lead and resource -- otherwise, these abusers could go on to do the same thing to another innocent animal, or even worse, inflict violence against another person (we know too well the link between animal abuse and violence towards people).

Sign the petition demanding that the Sullivan County Sheriff's Department not rest until Church's would-be killers are found and held accountable!