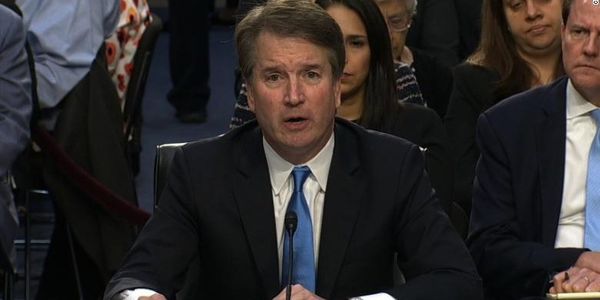 There are many reasons to oppose Judge Kavanaugh's nomination to the Supreme Court. Throughout his tenure, he has taken every opportunity to rule against civil rights, workers' rights, consumer rights, and women's rights. And of course, there's the recent barrage of accusations of sexual misconduct lodged against him by at least three women.

Yet, there is another, equally if not more troubling fact about Judge Kavanaugh that should concern not just progressives, but all Americans alike — that Kavanaugh, a sitting judge, likely lied under oath long before he was ever considered for the Supreme Court.

According to reports, Kavanaugh knowingly lied about having received stolen documents, including confidential memos and talking points for Democratic staffers, in order to help push through judicial nominees when he was working for George W. Bush in the early 2000s. When asked under oath for his confirmation hearings for the D.C. Circuit U.S. Court of Appeals if he had received such documents, he said no.

But emails have recently surfaced that tell a different story. The communications show that the aide who stole the documents, Manny Miranda, sent them directly to Kavanaugh and warned him not to distribute with others. Another email chain between the two even included the word "spying" in the subject line.

Unfortunately, that's not the only time Judge Kavanaugh has been accused of lying under oath. Two senators have also accused him of knowingly misrepresenting his role in creating interrogation policies for Guantanamo detainees during his confirmation hearings as well.

If true, these implications are serious — not only would a sitting judge have committed a crime by lying under oath, but the Republican-led Senate, knowing this, seems poised to confirm him anyway. That means the laws that govern the lives of hundreds of millions of Americans could actually be ruled upon by a person that has no respect for the law in the first place.

These accusations merit further investigation by the proper authorities and they must take action to determine whether or not Judge Kavanaugh has lied under oath, and if that is the case, he shouldn't just be disqualified from being a Supreme Court judge, he should be disbarred altogether. It is time that the D.C. Bar Association look into these troubling allegations.

Please sign the petition and demand to know the truth about Kavanaugh. Tell the D.C. Bar to investigate Judge Kavanaugh.
Sign Petition
SHAREShare With FriendsTWEETEMAILEMBED
Sign Petition
See more petitions:
You have JavaScript disabled. Without it, our site might not function properly.