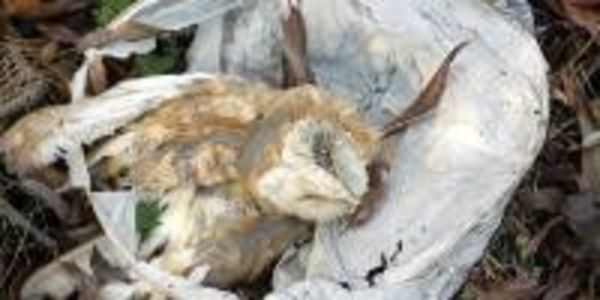 Chinese (or ‘Sky’) lanterns consist of a paper-covered wire or bamboo frame and an open flame heat source, which lifts the lantern into the air where it can float for miles from the point of release. Once extinguished the lantern falls back to earth.

Animal Risk:
Lanterns pose a threat to animals, as they can cause injury, suffering, and death, through:
ingestion, entanglement, and entrapment. When ingested the sharp parts of a Chinese Lantern can tear and puncture an animal’s throat or stomach causing internal bleeding.

Animals can become entangled in fallen lantern frames and suffer from injury and stress struggling to get free, or starve to death. Marine life is endangered by lanterns falling into the sea.

Fire Risk:
Sky lanterns can cause fires, which destroy habitats and set animal housing, feed and bedding alight. They are already been banned in some countries and fire services have issued warnings to people over the fire risk following incidents such as the Smethwick recycling plant fire.

Don’t be fooled into thinking that ‘biodegradable’ lanterns are safe! Bamboo can take decades to degrade and there is still a fire risk

Currently, The Lights Fest is attempting to host a sky lantern releasing festival in Chicago, Illinois. This would cause major environmental concerns for areas miles away from the event!

Additionally, the releasing of sky lanterns is banned in the state of Illinois as of 2013.

A Letter from the State:
"The lanterns, also known as Floating Lanterns, Wishing Lanterns and Celebration Lanterns, are airborne paper lanterns that contain a small candle or fuel cell that when lit, heats the air in the lantern making it rise into the air. They are known to travel up to several miles from where they were originally released.

In popular culture, they are often seen at weddings, dedication ceremonies and other
celebrations. Sky Lanterns have been known to cause residential and forest fires, as well as other losses. Sky Lanterns also pose hazards to aviation and vehicular traffic. Because of these fire and safety hazards, The Office of the State Fire Marshal banned the use of Sky Lanterns by placing them on the Prohibited Consumer Fireworks list on May 14th, 2013."
Sign Petition
SHAREShare this petition with friends!TWEETEMAILEMBED
Sign Petition
See more petitions:
You have JavaScript disabled. Without it, our site might not function properly.