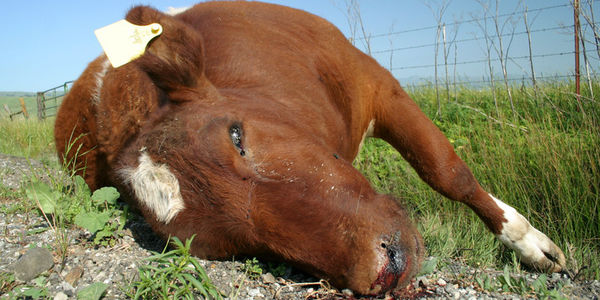 2,000 Cows Cooked to Death in the Heat of Kansas. Help Save Farmed Animals!

At least 2,000 cattle have tragically died at a concentrated animal feeding operation in Kansas. Temperatures soared to over 100 degrees in the plains state, and rows of carcasses showed the toll the heat took on the poor cows.

Summer isn't the only problem. Regardless of season, this industry produces so much death and harm, it is truly beyond redemption and beyond reform. We must reduce our meat intake to take our power back from the factory farm corporations! These corporations both allowed cattle to die in this deadly heat, and who will continue to slaughter the "lucky" ones who survived for profit!

Sign the petition now to demand that lawmakers implement Meatless Mondays in those U.S. states that are most responsible for animal agriculture!

The footage coming out of Haskell County - the top cattle-producing county in Kansas - is horrific. The sun literally cooked cows to death in the fields, with their warm bodies scalding at more than 104 degrees Fahrenheit. Clearly the industry was not invested in keeping the cows safe. How can we continue to support companies that allow animals to suffer so much?

While cows are the most obvious victims of this awful industry, they aren't the only ones who suffer. Factory farming corporations like Cargill and Tyson are also notoriously abusive to their workers, paying low wages and forcing employees to work long hours in abysmal conditions.

Animal agriculture also contributes massively to climate change - by some accounts, account for as much as a whopping 15% of total greenhouse gas emissions. In a devastating twist of irony, the industry's own actions have contributed to extreme heat waves like the one that just occurred in Kansas, killing the same cattle that the corporations need to make a profit off of. So the industry is not only hurting animals and workers - it's also hurting itself. Its actions against its animals, workers, the environment, and the climate at large are so egregious that Cargill, Tyson, and similar corporations could be compared to comic book supervillains.

We cannot wait any longer for reform from an industry that has proven it is committed to producing massive harm. We must, as consumers, take power into our own hands as soon as possible by demanding a reduction in meat intake. As the states that are the most responsible for cattle farming, Texas, Nebraska, Kansas, Oklahoma, and California must set an example.

Sign the petition now to demand that legislators in Texas, Nebraska, Kansas, Oklahoma, and California create Meatless Monday programs to encourage residents and restaurants to reduce meat consumption. Animals' lives, workers' wellbeing, and the fate of the climate are all at stake!
Sign Petition
SHAREShare With FriendsTWEETEMAILEMBED
Sign Petition
See more petitions:
You have JavaScript disabled. Without it, our site might not function properly.

Care2
2,000 Cows Cooked to Death in the Heat of Kansas. Help Save Farmed Animals!
SHARETWEET