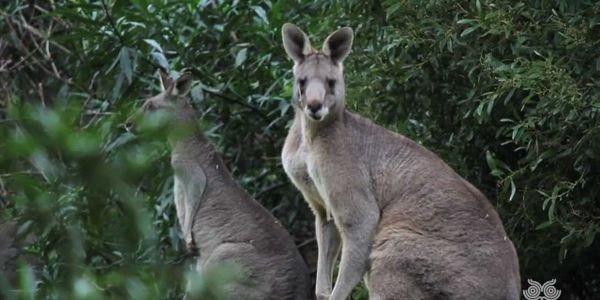 Government sanctioned slaughter of kangaroos in Australia sees millions of kangaroos killed annually for the vile kabgaroo meat industry, The killing of so many kangaroos means that Australia leads the world in the slaughter of wildlife and is the only country in the world to lose species in the recent past.
Kangaroos being wild means the killing is done at night from trucks in Australias outback. Shots arent always clean and the animals often lead painful deaths. Baby Joeys are disposable and are clubbed to death on the spot, all sanctioned by the Australian Government. Older juveniles that manage to escape die slow painful deaths through starvation and predation as they are not strong enough to carry on without their mothers.
Recently UK discount stores Lidl and Iceland have started selling kangaroo meat further fuelling the demand to kill more kangaroos. Not only is killing wildlife on a commercial basis unethical it is also unsustainable and kangaroo meat is also one of the most dangerous meats you could possibly consume.
The animals are processed in filthy conditions in the Australian outback and the meat often contains high levels of e coli and salmonella as well as many thousands of parasites , not all of which can be killed with cooking.. Kangaroo meat also contains the highest levels of L Carnitine of any red meat. This chemical is a known link to heart disease, strokes and heart attacks.

Thank you for your letter dated 13 March 2015 in regards to the Viva! campaign and our first National Day of Action against the trade in kangaroo meat at Iceland.

Firstly, we would welcome a chance to meet to discuss these matters further. However, I also want take this opportunity to show that our concerns are legitimate and repeat the request that Iceland demonstrates its ethical stance by removing kangaroo meat from all your stores with immediate effect.

I would also like to point out that we wrote to Iceland last year with our concerns after we were informed that the chain was trialling kangaroo meat in a store in Stoke-on-Trent. We did not receive a reply to that letter, which is regrettable as I'm sure you agree it would have been better to have entered into dialogue at that point.

You maintain that only male kangaroos are shot for Iceland. However, Viva! has been campaigning on this issue – along with Australian wildlife protection groups – since the late 1990s. So we have a long history and an excellent knowledge of the issues. In 1999/2000 Viva! persuaded all the big supermarkets (Sainsbury's, Tesco etc) to drop kangaroo meat. All these supermarkets said that they only sourced meat from male kangaroos, but dropped this claim quickly because they couldn't back it up. Our campaigning also convinced football boot giants Adidas and Nike to phase out kangaroo leather several years ago.

I know that you need no convincing over the brutal ways baby animals are pulled from their mother's pouches and either decapitated or brained. We know this understandably repulses the general public and retailers know that they cannot justify their part in this trade because of the fate of pouch young and other dependent adolescents.

I certainly accept that you may have been told by your suppliers that all the kangaroo meat you are supplied with comes only from male kangaroos, but our sources in Australia have maintained that this would be impossible to verify. In practice, shooters are aiming at fleeing animals from the back of a truck at night – making it impossible to be sure which sex they are shooting at. The shooters behead them, gut them and chop off their tails in the field. There are no department ‘tags’ provided for males or females; it’s just for kangaroos. There is no official recording of numbers of males or females shot; it is not supported by policy. Females and males are treated exactly the same.

Quite apart from the very significant welfare issues around the violent disposal of joeys, there remains additional significant reasons – from human health implications, conservation concerns and other welfare related considerations – that should also be brought to your attention.

Regardless of gender, shooters aim for the head, but kangaroos have small heads. With animals hopping in all directions, many are shot and suffer horrendous injuries. Mouths are blown off, they lose eyes, have arms/legs shot off and try to hobble away on one foot or suffer internal injuries.

Sydney University’s THINKK (The Think Tank for Kangaroos), which is made up of eminent ecologists and animal experts, says:

“[...]  field data suggests that anywhere from 120,000 to over a million kangaroos are miss-shot and processed annually. It is unknown how many are left behind. There is virtually no monitoring of killing in the field and given the field conditions of the killing it impossible to do so.”

In other words, this is an industry where it is impossible to guarantee anything approaching humane slaughter.

Far from exploding, populations of kangaroos in some areas of Australia have plummeted in recent years and have dropped by half in most areas of Queensland in the last year alone. Analysis of NSW (New South Wales) government count data obtained under FOI by the Green Party in Australia shows up to 64% of NSW western survey transects are returning zero counts of kangaroos. In 2011, the four large kangaroos that can be commercially shot were nominated for listing in NSW as threatened species.

Wildlife experts are concerned that turning them into just another commodity is not only cruel it is unsustainable. Therefore it is unsurprising that there is a very real fear that popularising kangaroo meat in Britain could have an incremental, devastating impact on Australian wildlife. Australia already has the world's worst record for wildlife extinctions, with 23 birds, 78 frogs, and 27 mammal species (including kangaroos) having vanished forever since Western settlement.

Further to demolish this myth over over-population, Australian Senator Lee Rhiannon states: “It is biologically impossible for kangaroo populations to ‘explode'. They are slow-breeding, slow-growing marsupials with 73% juvenile mortality. Kangaroo population growth sits at 3-10% in good years, with up to 60% crashes during drought.” Much of Australia is currentlyexperiencing extreme drought (rainfall was below average for most of Australia last month and the country recorded its second warmest February on record), which will have a major impact on kangaroo numbers. Yet the commercially driven killing continues.

The kangaroo industry exists for commercial reasons alone. Any business is based on the concept of growth. Commercialising any truly wild animal is unsound from a conservation point-of-view.

In your letter you claim that your suppliers “... process the meat in EU-approved facilities that ensure the highest standards of food safety and hygiene.” However, this ignores the actual killing and initial butchering of the animals – which happens where they are shot in the heat and the scrub of the outback. Kangaroos are only inspected for disease after they have been killed, but the unclean nature of killing on dirt (with bacteria, excrement and blood on the ground, dirty trucks etc) means that many do not consider the meat safe to eat.

This month, a report in the Australian press says that investigations by the NSW Food Authority  have found numerous failures in basic hygiene by the NSW kangaroo meat industry.  This led to Australian MP John Kaye to say: "This so-called healthy alternative to other red meats could be riddled with pathogens." Five years ago, independent testing had founddangerously high levels of Salmonella and E.coli in kangaroo meat bought from supermarkets. Russia has banned imports of kangaroo meat due to unacceptable levels of E.coli bacteria. Furthermore, new rules will mean less health monitoring of food related illnesses and deaths in Australia.

There are also other human health concerns with kangaroo meat. A chemical called L-carnitine is present in all red meat but kangaroo meat has more per gram than any other meat. Research from 2013 associates L-carnitine consumption with a build-up of fatty deposits in blood vessels, which can lead to heart disease, strokes and heart attacks.

We are pleased that you acknowledge that there are significant welfare issues around the killing of females, but we remain unconvinced that a male-only shooting policy is actually in place and is working. Even if it was, there should be enough information in this email to convince you that the trade in kangaroo meat is unsustainable, unhealthy and cruel – and Iceland, as an ethical retailer, should stop selling it immediately.

We look forward to hearing back from you.