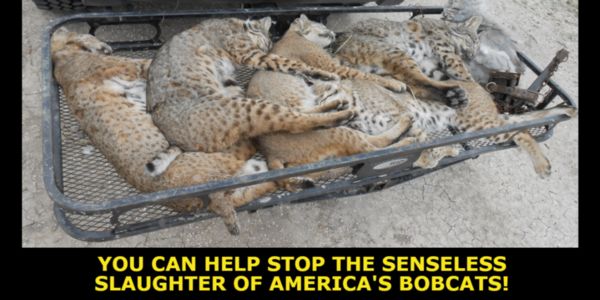 Hundreds of bobcats are going to be legally slaughtered for "sport"! Add your name if you want lawmakers to stop this, NOW!

"The only limit is the original one set by the U.S. Fish and Wildlife Service at 500 statewide, with 1,000 bobcat-hunting permits, allowing one to be taken per person, given out from a lottery that took place in September," reported one news source.

But the total bobcat population in Illinois is only around 5000, according to the Illinois Department of Natural Resources, which means that up to 10% can be slaughtered.

This is their policy, even though bobcats were recently on the threatened species list, and were protected for over 40 years.

When these magnificent wild animals are killed, the balance of the eco-system is disrupted, leading to all kinds of problems - the populations of prey animals explode, resulting in the over-consumption of food sources, which ultimately leads to environmental destruction and suffering for all animals in the eco-system.

Don't you want to stop this heartless hunt of defenseless wild bobcats?

Then add your name to demand that the Illinois state legislature pass a law to protect bobcats from hunters, once and for all!