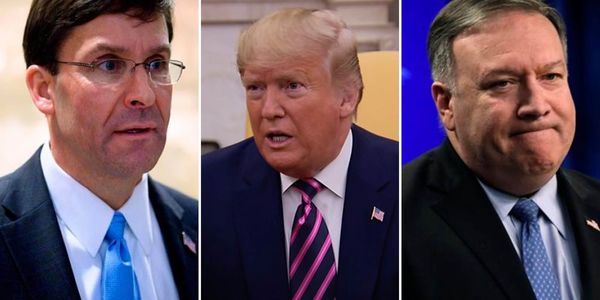 Demand the Secretaries of State and Defense be forced to testify about Trump's contradictory justifications for attacking Iran!

Following the January 3rd US drone strike that killed the Iranian general, Qasem Soleimani, senior US officials have put forward questionable, shifting rationales for the provocative, destabilizing attack. Trump himself has offered up no less than four different reasons for the assassination, including a claim that intelligence suggested there were imminent plans by Iran to attack four US embassies.

Struggling to stick to even the simplest of talking points, Trump has failed to keep his story aligned with his own Secretaries of Defense and State, Mark Esper and Mike Pompeo, respectively. While none of this is surprising with someone with Trump's brazenly dishonest track record, it is deeply troubling.

On various news talk show appearances since the attack, both Esper and Pompeo have fumbled repeated opportunities to clarify the administration's position and to corroborate Trump's claim of imminent embassy attacks. Secretary Esper went so far as to say he was unaware of the evidence Trump cited while somehow simultaneously asserting it to be accurate and true.

On January 13th, Secretary Pompeo declined an invitation to appear before the House Foreign Affairs Committee to answer questions on the state of US-Iran relations and the specifics of Trump's broader foreign policy strategy with respect to Iran. That same day NBC News reported that President Trump originally authorized the attack on Soleimani in June of 2019, a full seven months before the strike eventually occurred. One might wonder if all parties are working with the same definition of the word "imminent" at this point.

We're well past the point of friendly invitations. For the security and safety of Americans at home and abroad, we need concrete and immediate answers from the Trump administration on the necessity and justification for antagonistic, military actions being conducted by our nation.

Care2
Demand the Secretaries of State and Defense be forced to testify about Trump's contradictory justifications for attacking Iran!
SHARETWEET