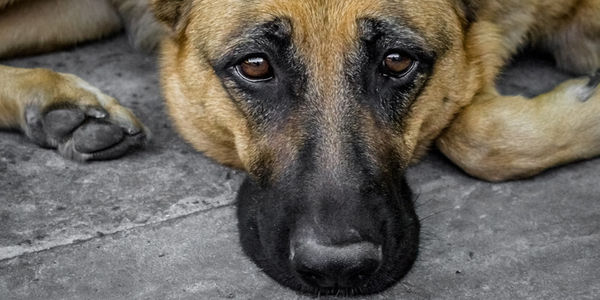 A Veterinarian Choked and Beat a Crying, Cowering Dog While His Family Recorded Video

The video starts with the Michigan veterinarian inside someone's home - possibly his own - and he is hollering. He directs his anger at a German shepherd, who cowers with his ears back and body trembling, holding himself low to the ground. As he shouts at the pup, he stalks up to him.

Then, on camera, the vet grabs the animal, throws him down on the ground, and begins to strangle him. Hands wrapped around the animal's throat, he holds him there, choking him as the poor dog whimpers and cries in pain. Then, as if that weren't enough, he picks up the dog and smashes him against the ground multiple times. The video is filled with the haunting sounds of the pup desperately yipping and screaming, unsure how to escape the abuse.

So far, authorities have charged him with misdemeanor animal abuse. But he still has his license for continuing to practice as a veterinarian. The Michigan Board of Veterinary Medicine must protect other animals by revoking his license now!

This man made a vow to protect animals and improve their welfare. That is his job as a medical professional who serves pets and other animals. So far, we only know about this one instance of cruelty towards a dog, possibly inside his own home. It's unclear at this point if he  ever abused any animals at his veterinary office.

Following this assault on the dog, someone posted the video on YouTube. Investigators say they've traced the video back to the veterinarian's family, and likely his son.

That raises another important question: who knows what else was going on inside that house? Research has shown a strong link between abusing animals and abusing people as well. If this man has so much rage and anger that he would beat and attack an animal, what else has he been doing?

Shortly after the video was made public, prosecutors in Macomb County, Michigan did serve the man with animal abuse charges. For some unknown reason, they refused to press for felony charges and proceeded with much lower-intensity misdemeanor charges instead. This is an important start. However, this does not protect future animals from possible abuse.

Authorities must conduct a full investigation into this man's history of animal cruelty, and ban him from ever practicing veterinary medicine again! He has proved he can not be trusted with pets' wellbeing. Sign the petition if you want to save animals from abuse!
Sign Petition
SHAREShare With FriendsTWEETEMAILEMBED
Sign Petition
See more petitions:
You have JavaScript disabled. Without it, our site might not function properly.

Care2
A Veterinarian Choked and Beat a Crying, Cowering Dog While His Family Recorded Video
SHARETWEET