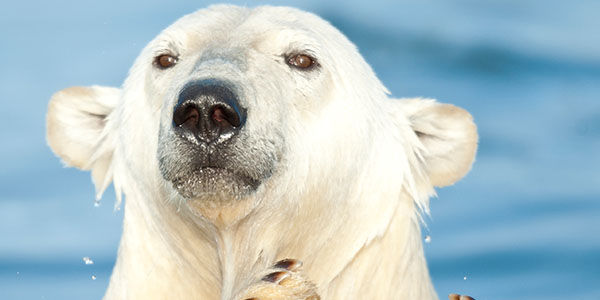 We are all anxious about global warming, but perhaps not anxious enough!

Most of us accept without question the supposed need for 'Ice-breaker' ships to regularly disrupt and destroy the integrity of polar sea ice. Sea ice occurs as loose floating ice or compressed sea ice, large ice sheets comprising parts of the annual 'ice cap', and floating glacial-origin ice shelves adjacent to polar lands. Polar-region sea ice is broken for various reasons, mainly: (1) to continue the use of shipping channels for cargo container vessels, (2) to conduct lucrative polar cruise-ship tourism expeditions for a wealthy minority of clients, and (3) to persevere with multifarious scientific investigations, mainly culminating in the suggestion that our polar ice cover is rapidly depleting due to global warming, thereby threatening the pristine wilderness value represented by the polar regions. This also destroys polar bear habitat.

WHY, with this threat in mind, do we keep effectively opening, and unthinkingly leaving open, the world's ‘refrigerator doors’ in this way, using strengthened ice-breaker ships?

These activities (polar shipping, lucrative minority cruise-ship tourism, and excessive scientific expeditions) are arguably unnecessary; they could be replaced with alternative approaches. Due to impacting the integrity and outflow of land ice, use of ice-breaker ships must urgently be challenged and preferably stopped completely. Shipping, tourism and scientific exploration activities contribute substantially to a massive ongoing reduction in annual polar-region sea ice, and also to dumping of waste in polar regions, both on land and at sea, endangerment of some Antarctic and Arctic wildlife species, localised warming of polar regions and overconsumption of fossil fuel resources, and ongoing repetitive damages to land and sea-based ice stores and ice formation. The latter outcome – damage to ice stores and re-formation – then contributes to a substantial speeding up of the outflow and calving of glacial ice from ancient land-based ice stores (particularly from Greenland and Antarctica). This has occurred to the extent that sea ice may at times appear to be spreading, while in fact land ice has rapidly diminished in recent years. Some few entertainment films even highlight the 'excitement' of the practice of cracking off large ice sheets and ice shelves. And we are already aware of the loss of ice causing a threat to polar bears!

Polar activities make us humans feel like daring conquerors, as we face the unknown, the wild raw elements and extreme cold in some of Earth’s last unexplored wilderness regions, and test our limits, similar to Tarzan not long ago in Africa's jungle. However, unbeknownst to most of us, ‘invisible’ often nuclear-powered icebreaker ships continue to dump toxic nuclear waste and human waste in the Arctic Sea, the Southern Ocean, and other waters close to the poles, and to destroy the Earth’s refrigerator doors – polar ice caps and sea ice – that help keep our planet cool enough.

Please URGENTLY join me in petitioning political leaders of countries involved in 'Ice-breaking', by signing this petition! Help request that they find less damaging ways to conduct their business and pleasure! Demand the phasing out and cessation of destructive, needless and senseless 'Ice-breaker' ship activity! Help "keep our fridge door shut", preventing unnecessary and excess warming of both Arctic and Antarctic regions! Demand polar wilderness be left in peace, unassailed by endless rounds of tourists and ‘scientists’! And help reduce big-picture impacts of global climate change! Stop the Ice-breakers!