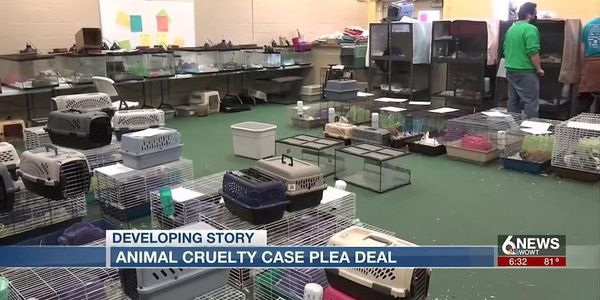 He Locked 665 Animals in His Home. Many Died From Horrible Neglect.

Authorities in Nebraska discovered a startling 665 animals in a man's home. Sadly, with so many animals in the house, it was impossible for the man to sufficiently tend to and care for them all - and as a result, officials found that dozens of the animals inside were dead.

Sign the petition to protect animals, by preventing this man from owning pets again!

The 665 animals included chinchillas, rabbits, guinea pigs, lizards, turtles, snakes, finches, and even exotic birds. Most of the animals were horribly injured, malnourished, or otherwise sick because of chronic neglect. Officials were forced to euthanize two of the surviving animals because they were so badly wounded.

Just as heartbreaking, 70 of the pets were already deceased, their corpses laying out among the living.

It's not surprising that the animals fared so badly. When visiting the home, investigators found urine and feces littered throughout the man's home. On top of that, there was very little food and water - some animals didn't have any provisions nearby at all.

The rescued animals received veterinary care from the Nebraska Humane Society, but experts warned that many of the pets will continue to experience health challenges for the rest of their lives.

Authorities have since arrested the man and charged him with multiple counts of animal cruelty resulting in death. However, even if he is found guilty, that doesn't automatically mean he will never own pets again because of Nebraska's lax laws. We must protect other animals from this terrifying fate.

Demand that authorities ban this animal abuser from ever adopting, owning, or living with animals in the future! Sign the petition to speak out.
Sign Petition
SHAREShare With FriendsTWEETEMAILEMBED
Sign Petition
See more petitions:
You have JavaScript disabled. Without it, our site might not function properly.

Care2
He Locked 665 Animals in His Home. Many Died From Horrible Neglect.
SHARETWEET