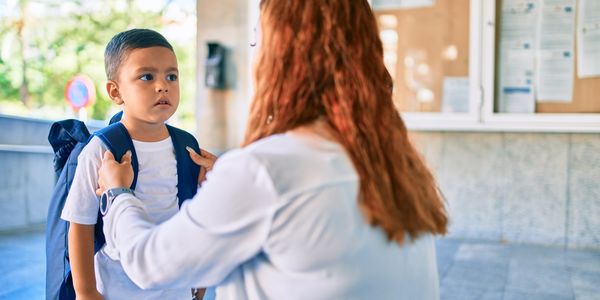 If you do a quick Google search of the term, you'll find that it's more than just a dystopian concept – it's an actual corner of the market that has emerged thanks to the epidemic of school shootings in the United States, and politicians' shameful inaction.

Sign the petition demanding that the U.S. Senate vote YES on an assault weapons ban before the school year begins!

Teachers, students, and parents have been left for too long bearing the brunt of worry, cost, trauma, and devastating grief that come with the near daily school shootings in America. Now, instead of responding with strong action to protect our kids, lawmakers are letting the free market respond with macabre school gear – backpacks marked as "tactical" and equipped with "armored plates," some going for almost $600. Is that the new price of keeping your child safe in the United States?

Beyond being expensive and horrifying as a concept, the idea that a mass shooter walks into a classroom and students will have the time and wherewithal to grab their backpack and position it as a shield is absurd. Not to mention, even behind bulletproof material, gunshots can wound and even kill people. The fact that this product exists at all is a testament to how poorly the threat is understood and the fantasy some of us engage in about how to end it.

In the first half of the 2021-2022 school year, "at least 136 instances of gunfire occurred on school grounds." To put that in perspective, there are only 180 days in an entire school year. In 2012, 20 children between the ages of 6 and 7 were murdered along with 6 staff members at Sandy Hook Elementary School. Ten years later, in 2022, 19 children and 2 staff members were killed at Robb Elementary School in Uvalde, Texas. In between these most fatal shootings, there have been hundreds and hundreds more. Rarely a day goes by in the United States that we are not reminded of the irony of our situation – guns have more protections than school children do.

At Sandy Hook and Uvalde, and too many other school shootings to name, an assault weapon was used – an AR-15 style rifle specifically designed to kill quickly, and en masse. Up until 2004, the manufacture of these rifles for civilian use was actually banned. But that ban was allowed to expire in 2004, a tragic foreshadowing of the decades and decades of inaction from politicians that would follow – and the young deaths that would come as a result. But cowardly politicians finally have a chance to make this right, and listen to mercy and reason instead of gun lobbyists. An assault weapons ban recently passed in the House, and though it is projected to fail in the Senate, we must not rest in urging senators to at last pass this commonsense piece of legislation that would save countless lives. And if they don't, we will know exactly who not to vote for in this year's upcoming midterm elections.

Sign the petition demanding that the U.S. Senate passes bill S.736! There is no reason for civilians to own the killing machines that are assault weapons.
Sign Petition
SHAREShare With FriendsTWEETEMAILEMBED
Sign Petition
See more petitions:
You have JavaScript disabled. Without it, our site might not function properly.