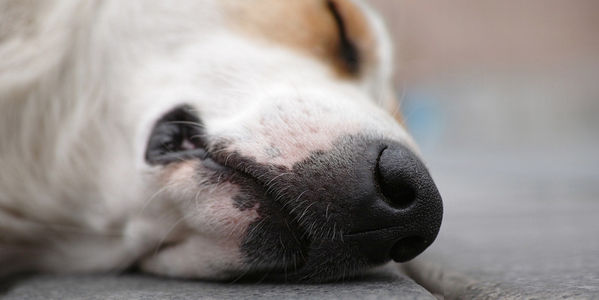 This family's dog was inside its own, gated yard. Then a cop shot it dead.

A pet dog was hanging out in its family's fenced-in front yard in early August, with its owner nearby. It was a normal Monday. The light glinted off the home's "Beware of Dog" sign. Everything seemed peaceful. Then, while the pup was sniffing around the grass on its gated property in Detroit, Michigan, a police officer walked up with her own K-9.

Sign the petition to demand that the Detroit Police Department fire their dog-killing cop!

Things started off amicably enough. The two dogs initially sniffed noses and trotted along together, separated by the 6-foot-high wrought iron fence posts. Then, as happens with dogs, things turned nippy and the family pet grabbed onto the new dog's muzzle.

There were so many options the police officer could have employed then. She could have distracted both animals, using a loud noise or water. She could have used her department-issued night stick or even a twig laying on the ground to break the pet's grip using what's known as the "break stick" method. She could have called the pet's owner over to help out, letting her know there was a problem and she needed assistance. In fact, video evidence shows that the owner was actually already walking over to figure out what was going on.

There were so many choices for how to deal with this situation. This officer chose none of those.

Instead, within 20 seconds, she pulled out her gun. She aimed, at a point-blank range of less than a few feet. And she shot the family's pet. Once. Right in the head.

The family's pet pup fell back, sagging. Video shows it writing in pain. And then, finally, it died.

Infuriatingly, this cop's department has actually rushed to her defense! Her commanding officer is actually, and incredibly, claiming this was a "life or death situation." He also tried to pin the blame on the owner, saying it's her fault -- that she should have kept her dog in the backyard.

Since when was that ever a rule? That your dog can only be allowed to live if kept in a backyard? Let's be clear: this family's dog was on their own property. That property was enclosed, surrounded by a 6-foot-high, solid metal fence. They even kept a "Beware of Dog" sign featured prominently. There is no way this is the pet's or family's fault. That rests solidly with trigger-happy, dangerous police who don't respect other life, and won't take accountability for their murderous actions.

Police officers are handed deadly weapons and sent out onto our streets, to interact with our families, our neighbors, our friends, our pets. And once they pull a gun's trigger, aimed at another creature's head or heart, the results are irreversible. Knowing how powerful and lethal their weapons are, you'd hope officers would approach this with some level of restraint and caution, recognizing the incredible responsibility that comes with so much firepower.

But obviously, this officer does not meet those vital requirements. Sign the petition and call on Detroit PD to fire her immediately before she takes any more animal (or human) lives!
Sign Petition
SHAREShare With FriendsTWEETEMAILEMBED
Sign Petition
See more petitions:
You have JavaScript disabled. Without it, our site might not function properly.

Care2
This family's dog was inside its own, gated yard. Then a cop shot it dead.
SHARETWEET