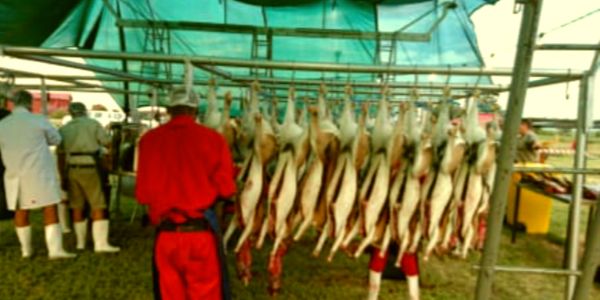 STOP LONDOLOZI ABATTOIR FOR THE PROCESSING OF WILD ANIMALS NEAR KRUGER, SOUTH AFRICA

Londolozi means "Protector of all living things" in Zulu, and it is the name of a renowned Luxury Safari privately owned reserve near the Kruger National Park in South Africa; this property shares, via Mala Mala, 50 Km of open border with the Western side of the National Park. The Reserve is an exclusive place which has hosted local and international celebrities since 1976; at that time, it became the first Private Reserve and 'buffer zone" of Kruger offering exclusively photographic eco-tourism in South Africa.

Without great publicity, a "Draft Assessment Report for the Proposed Development of Roads and a Rural Abattoir" in the middle of this unique eco-system rich in wild animals, endangered plants and trees and seasonal wetlands which are crucial breeding points, was submitted in May 2019 and shockingly approved on the 15th of November.

The "preferred locality for the proposed abattoir" will be on the banks of the Sand-Sabie River, a seasonal water course recognized as one of the most biologically diverse rivers in the Kruger and in the whole South Africa. This is very concerning since it is renowned how slaughterhouses can pollute rivers with organic and chemical waste.

The Draft Plan went ahead without following all the legal steps of a proper public consultation, while all affected parties were not given enough information or a meaningful opportunity to comment.

. In fact, the Assessment Report was advertised very locally and due to a poor response, a larger public meeting was not even scheduled.

The Draft as proposed and approved, includes land alteration necessary to build the roads that should serve the abattoir and its workers and which will cross the water course, will go near and around endangered plants and trees and across bushes, will go around if not traverse a few ephemeral pans and create disruptive fragmentation of wetlands and habitats, upsetting the breeding and nesting of crucial birds, not to mention the disturbance caused by the traffic of trucks and consequent dust pollution affecting animals and plants.

Any attempt to obtain the Environmental Impact Assessment for this project, from the consultant or from the owners, the Varties, in order to submit in time a formal appeal, has failed.

Another concern is that the Draft does not mention how animals will be captured or killed, which wild animals will be slaughtered / processed in this facility, so close to the unfenced border of the Kruger. This could mean that wild animals from the National Park, who are a public treasure, could easily trot to their death and become meat. This also means that illicit and smuggling of wild animals could occur.

We approached John and Dave Varty, owners of the property, for explanations; apparently the Reserve has been put under pressure by a severe drought and the surrounding poor communities demand to eat the animals who are struggling to survive or have already died, so an abattoir could offer meat and jobs. But private reserves are human-managed systems with artificial water points, boreholes and dams; we question if proper management was planned; furthermore, eco-tourism also provides jobs and it is not clear why the communities are not helped growing skills for own empowerment and why are they rather given Kruger Parks' animals to eat every now and then. This is clearly not an ideal strategy or a long term solution for mitigating poverty.

WE DEMAND THE AUTHORITIES TO BLOCK THIS PROJECT AND STOP THE DEVELOPMENT OF ROADS AND ABATTOIR AND TO INVESTIGATE HOW LONDOLOZI IS "IMPLEMENTING CONSERVATION ACCORDING TO A MODEL WHICH PROMOTES SOCIAL UPLIFTMENT, WILDLIFE PROTECTION AND ECOLOGICAL BEST PRACTICE"